Loeb forced out of Silk Way Rally due to wrist injury 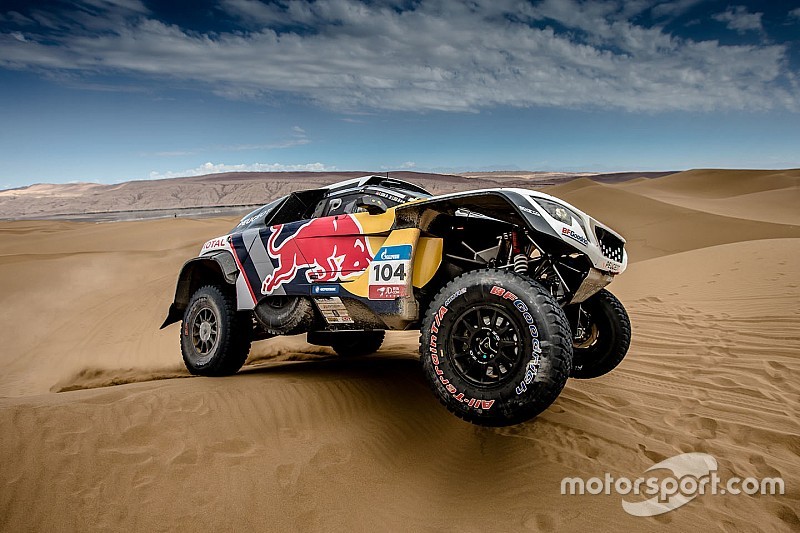 Sebastien Loeb will not rejoin the Silk Way Rally after his heavy crash on Monday due to a wrist injury.

The nine-time World Rally champion had looked set for the first victory of his cross-country rallying career as he completed the first week of the marathon event with a lead of over an hour in the latest iteration of Peugeot's Dakar contender, the DKR Maxi.

But on Monday he went into a drain near a river bed and caused severe front end damage to the car.

Loeb and co-driver Daniel Elena attempted makeshift repairs and continued for a while before abandoning the stage and returning to the service bivouac.

There Peugeot determined that the car could be repaired to allow Loeb to continue down the field, but he was advised to pull out on medical grounds.

A Peugeot statement said Loeb had sustained "a severe sprained wrist to the fingers and would not be able to continue racing as he cannot hold the steering wheel effectively anymore".

Loeb accepted the decision and added that he had learned enough about the new car before the crash to be very confident about Peugeot's 2018 Dakar chance.

"There was hole that I didn’t see, so we hit the inside, and we broke some parts on the front of the car," Loeb explained.

"We made few stops to repair the car to be able to continue, and eventually needed the help of the assistance truck.

"We couldn’t finish the stage because the night was coming.

"It was a long day. I have a sprained wrist, and I do not feel that great.

"So I am not able to continue driving as I can’t actually hold the steering wheel properly anymore.

"Once again I had a really good feeling with the Peugeot DKR Maxi, which is performing well, and I am sure that this is the car we need to tackle the Dakar next year."

Peugeot still leads the event with Cyril Despres. Both Despres and Stephane Peterhansel, who is currently 11th after an early crash, are in the previous version of the Peugeot, as Loeb had the only example of the new car in action on the event.

Loeb will now return to his World Rallycross Championship campaign with works Peugeot team Hansen, which resumes in Trois-Rivieres early next month.

Catch all the Silk Way Rally action with exclusive highlights on Motorsport.tv