X-raid Mini driver Carlos Sainz has taken the lead in the 2020 Dakar Rally marathon, after topping the third stage on Tuesday.

Sainz became the third different Mini driver to win a stage of the Saudi Arabia-based event, as he set the pace over the 427km loop around Neom in his buggy.

His final winning margin on the day was three minutes and 31 seconds over reigning champion Nasser Al-Attiyah, and he heads the Toyota driver by five minutes in the overall classification.

Stephane Peterhansel, who drives the other X-raid buggy, matched Sainz for pace for much of the stage, only to lose 10 minutes in the final stretch.

As such, Jakub Przygonski and privateer Yasir Seaidan completed the top four on the day in a pair of four-wheel-drive Minis.

Two-time Formula 1 champion Fernando Alonso, who had lost over two hours to repairs on Monday, was fifth-fastest as he finished the stage just six minutes slower than Sainz.

Overnight leader Orlando Terranova lost 13 minutes to Sainz but remains within the top three overall, and has over 10 minutes in hand to Toyota driver Yazeed Al-Rajhi and Peterhansel.

Mathieu Serradori, who drives a Century CR6 buggy, gave up 20 minutes but remains an impressive sixth and is marginally ahead of Monday stage winner Giniel de Villiers (Toyota).

Former World Rally Championship regular Khalid Al Qassimi, who had entered the day in seventh place, demolished his privateer Peugeot in a roll 300 kilometres into the stage and exited the marathon.

Also dropping out was returnee Vladimir Vasilyev, who looked on course to enter the top 10 in the general classification before his X-raid Mini caught fire.

Trucks: Karginov tops stage as Sotnikov falls out of contention

Kamaz driver Andrey Karginov topped the Trucks classification in the third stage, closing in on marathon leader Siarhei Viazovich in the general standings.

Another Kamaz driver Anton Shibalov was third-fastest on the day but has dropped to 20 minutes back in the general general classification.

Reigning champion Eduard Nikolaev's title defence took a blow as he surrendered over half an hour, while the fourth Kamaz of Dmitry Sotnikov - who had entered the day in second place - came to a halt early on and has not made meaningful progress through the stage since. 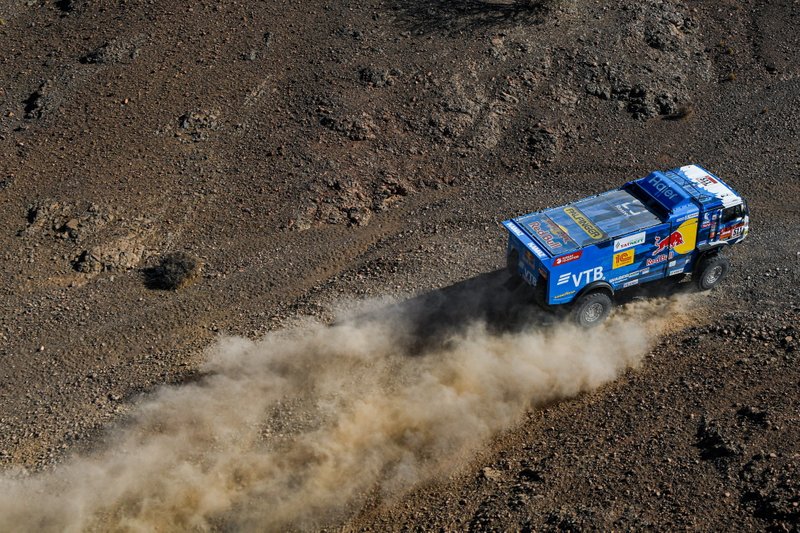 The stage win went to Gerard Farres, but last year's runner-up is already an hour and a half behind Currie in the standings.

Jose Antonio Hinojo Lopez and Sergey Karyakin make up the top four in the marathin, 1m40s and 7m41s behind Currie respectively.

Five-time bikes champion Cyril Despres came to a halt after 273km in his Red Bull-backed Overdrive OT3, and looks to have forgone any chance of a strong result on his SxS debut.

Brabec wants Dakar's new 'blind' stages to be the norm