Alonso: Silverstone qualifying "without a doubt" best of 2018 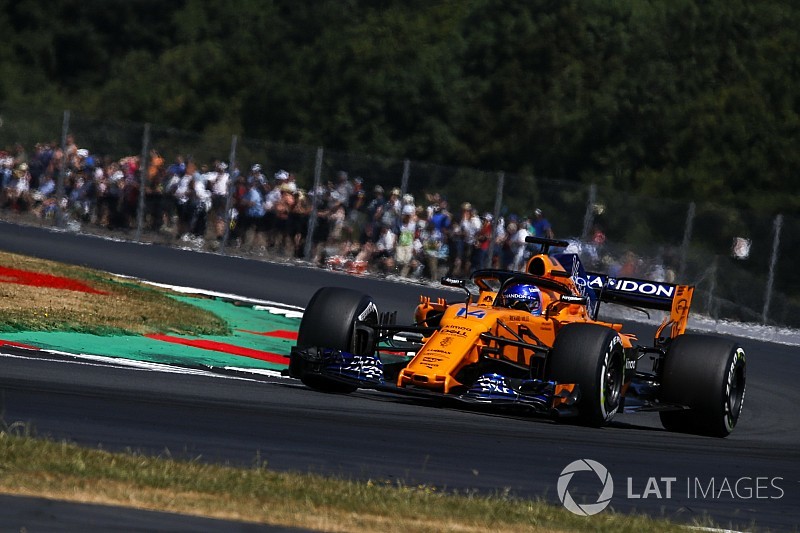 McLaren driver Fernando Alonso has hailed his British Grand Prix qualifying performance as the best of his Formula 1 season so far.

The Spaniard, who has started from the top 10 three times this season, qualified in 13th position, his best performance of the last four races.

With the downforce and power demands of the Silverstone circuit highlighting the McLaren car's deficits, Alonso believes Saturday's showing was undoubtedly the best of 2018.

Asked by Spanish TV if his qualifying performance had been on the limit, he said: "Beyond the limit. I think today was without a doubt the best qualifying of the year and the best weekend overall.

"All of Saturday has gone well and we were very competitive given our possibilities, obviously. So I'm happy and hopefully tomorrow we can score some points.

"The position is more or less the same as always, but it's a long track with a lot of downforce demands.

"We knew the problems we could have here so I think we managed to pull a complicated qualifying through with a good position and starting from the clean side."

Alonso insisted McLaren needs to bring car updates in the upcoming races in order to catch the frontrunners of the midfield group, especially now that Sauber appears to have overtaken the British squad.

"Overall, I'm happy, but we know our limitations, which are the same as in France and Austria, because the cars are still the same," he said.

"Hopefully in Hockenheim we can have some updates and in Hungary again. We know we still need some tenths to be up there with Haas and even Sauber, which is now at Haas' level.

"It's three Ferraris on track now," added the Spaniard after Sauber's Charles Leclerc qualified in ninth.