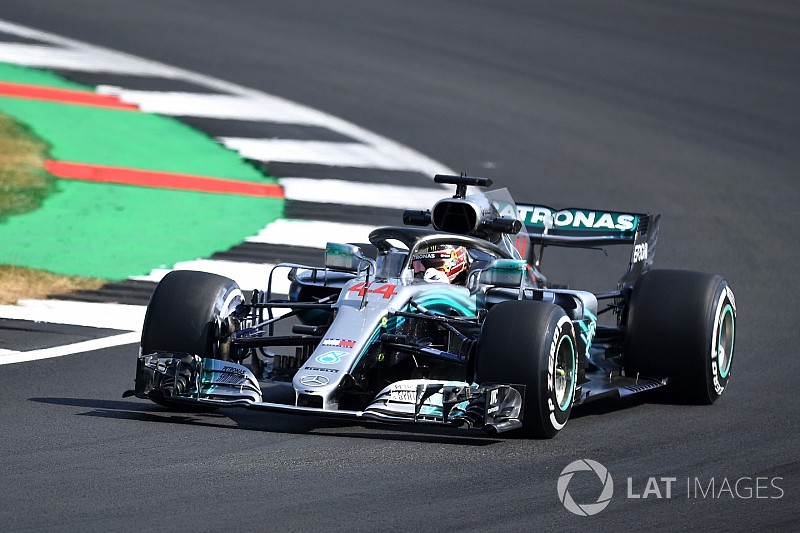 Lewis Hamilton launched his bid for a fifth-straight British Grand Prix victory by comfortably heading a one-two for the Mercedes Formula 1 team in opening practice at Silverstone.

Red Bull driver Max Verstappen set the early pace on medium tyres and was the first driver to dip into the 1m29s, but Vettel ended the opening half an hour on top on a 1m29.244s.

Bottas had threatened to blitz that with the fastest first two sectors but a mistake in the final part of the lap left him half a second adrift.

Hamilton broke the 1m29s barrier with a 1m28.908s just after the half-hour mark, which remained the best time until the frontrunners emerged again 20 minutes later on soft tyres.

Romain Grosjean then neutralised the session with a big crash at Turn 1.

Grosjean lost the rear of his Haas under braking after not deactivating DRS in time, which he blamed on the bumpy corner entry making him miss the button on his steering wheel.

The virtual safety car was activated during the recovery of the VF-18, which meant drivers had just over 20 minutes of green-flag running left.

Hamilton used that to go quickest on a 1m27.487s to establish a commanding advantage at the head of the field as Bottas failed to improve, although Vettel closed the gap to the Finn after dipping into the 1m27s himself.

He spent the first half of the session on hard tyres but jumped up the order on softs later on, then had a quick trip off-track exiting Luffield with around 20 minutes to go.

Moments later, Kimi Raikkonen spun his Ferrari at Brooklands after getting too greedy over the kerb at the apex.

The Finn ended up fifth quickest, splitting the Red Bulls of Ricciardo and Verstappen, who ended the session crawling to a halt just after the start-finish line.

Verstappen had reported a gearbox problem to his team and was told not to change gears and stop the car, which he did up against the pitwall on the inside of the track.

That triggered another VSC as Verstappen's car was wheeled through a gap in the pitwall.

Sergio Perez used a final minute of green-lap running to improve to eighth, ahead of his Force India teammate Esteban Ocon and behind Grosjean, as Lance Stroll completed the top 10 for Williams.

The McLaren driver spent most of the session without a laptime to his name and went off-track exiting the Maggots/Becketts complex on his first flying lap before reeling off several personal bests.

Gutierrez targets F1 return on back of Mercedes role