Ferrari believes it used team orders at "the right moment" 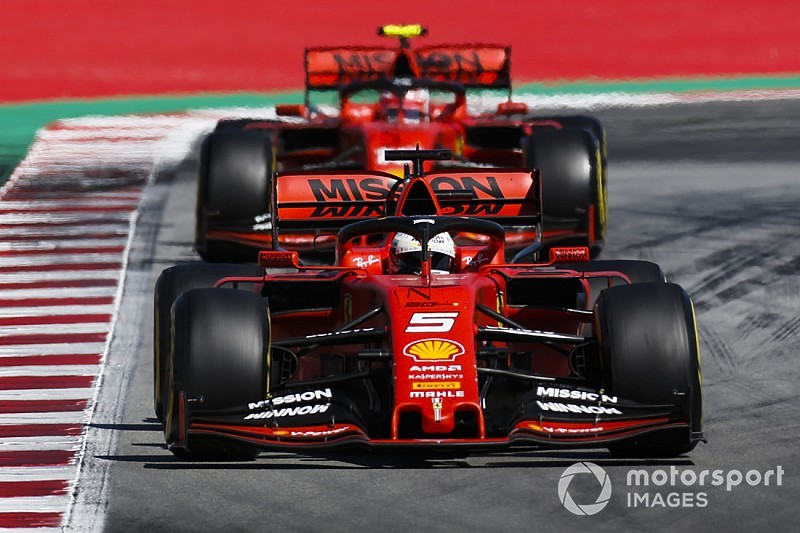 Ferrari Formula 1 boss Mattia Binotto believes team orders were deployed at "the right moment" in the Spanish Grand Prix and doubts there was reason to swap its drivers earlier.

Sebastian Vettel flat-spotted his right-front tyre with a lock-up at the start of the race, which dropped him back from the leading Mercedes drivers and Red Bull's Max Verstappen, and into the clutches of teammate Charles Leclerc.

Vettel was four seconds behind race leader Lewis Hamilton at the end of lap one and lost a further seven seconds over the next 10 laps before being moved aside so Leclerc could take fourth place.

"Should we have swapped earlier? I think it is a never an easy decision," said Binotto. "But we have proved as a team that since the start of the season we are trying to optimise our team result at the end.

"We have swapped in the past, we tried to swap again today, especially they were on different strategies at that stage. Should we have done it earlier? By the time you do it, you need to make sure that the driver behind has got enough pace. Otherwise you are swapping and not having any result. It may take a few laps for us to assess that."

After their first stops, Vettel spent 10 laps stuck behind Leclerc despite a tyre advantage and a second pitstop to make compared to his teammate executing a one-stop strategy at the time.

"Charles was fighting for third place with Verstappen because he was on a different strategy with the hard tyres with a single pitstop," said Binotto. "So it was also important for him to not lose any lap time at that stage of the race. We simply waited until the right moment and I am not sure we should have done it earlier."

Vettel said he was not surprised to be moved aside having described his flat-spotted tyre as a "pain in the arse" early on.

"My race was a bit compromised the first stint," he said. We didn't have many laps where I could go the pace of the car, so was I surprised? No. I think we would have been strong in the first stint with the soft tyre. Charles had a good stint but on my side I had a flat spot to manage, so lost quite a lot.

"Certainly once I was in free air I felt quite good and the pace was quite strong, also in comparison with Max."

Debate: Can Ferrari find a way back?

Barcelona test key to regaining pace Renault "had to give away"