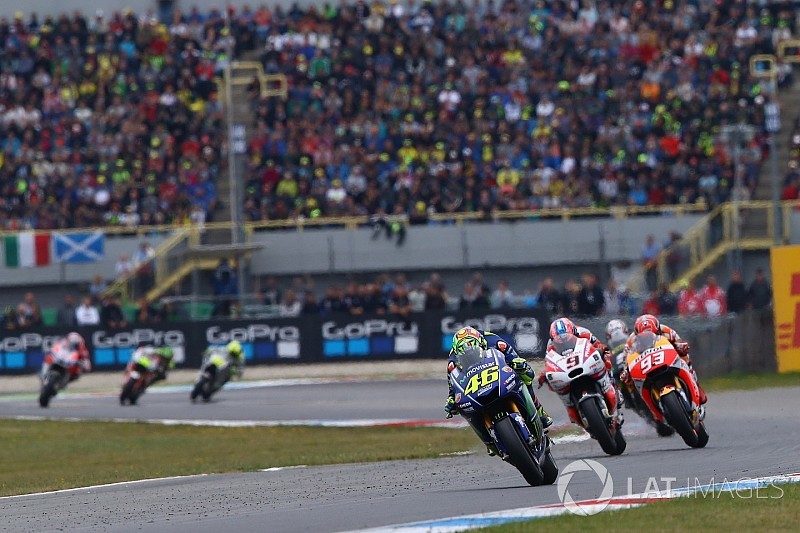 Leading MotoGP riders Valentino Rossi and Jorge Lorenzo have expressed their hopes that Formula 1 won't add Assen to its calendar, due to the potential impact on the track surface and layout.

The TT circuit, which in one form or another has been part of the grand prix motorcycling calendar since its inception in 1949, has been pushing to host an F1 grand prix from 2020 onwards.

FIA race director Charlie Whiting visited the track in January, and said only small changes were needed to make Assen eligible to host the Dutch Grand Prix, while in March the circuit appointed a race promoter to negotiate a deal with F1 owners Liberty Media.

However, when asked about it ahead of this year's edition of the Dutch TT, Lorenzo and Rossi did not welcome the prospect of an F1 race at the track.

“I hope they don't come because F1 have a lot of tracks that they use just for the cars, like Le Castellet [Paul Ricard] last week, and here Assen is just for motorcycles historically,” said seven-time champion Rossi.

“First of all, it would be a particular track for the F1 - but better not have F1 for us because you have less bumps, and I think for the historic side is better that just MotoGP races here.”

Although best known as the host of the Dutch TT, Assen has hosted a wide array of motorsport events in its history, in both bike and car categories.

Various F3 and Formula Renault series, as well as the now-defunct Auto GP and Superleague Formula championships, have raced here, while the US-based Champ Car series held a one-off race meeting at the track in its final full season in 2007.

The MotoGP calendar currently shares four circuits with F1, and all of them have faced criticism from riders over the ripples in the asphalt – with the downforce generated by F1 cars widely seen as a culprit.

Two of those tracks – Barcelona and Silverstone – were recently resurfaced, but this is not a permanent solution, with LCR Honda's Cal Crutchlow stating last year that tracks MotoGP shares with F1 became bumpy “within a year” of being resurfaced.

“I hope [F1] doesn't come here, firstly because the bumps, and second probably because they will have to modify so much the track," said the Ducati rider.

"It would be very strange to see the F1 cars riding in a track that is completely green [with grass verges] outside the race track – but everything is possible.

“I don't know the modifications they should do in that case, but obviously for the bumps will be better if F1 doesn't come here.”

Lorenzo's Ducati teammate Andrea Dovizioso cast doubt over the viability of an F1 race at Assen, but was not opposed to it.

“Here? Impossible,” he said. “Because it is too tight. Too small, too tight. If they will make some changes - but I don't think so. If will happen, it will be nice. It is not my problem.”

Four-time champion Marc Marquez adopted a similar viewpoint, and said that the likelihood of a bumpier surface did not bother him.

“F1 would be very, very fast because [there are] many fast corners and maybe the laptime would be one minute, I don't know, because they are so fast.

“But always is good when F1 is interested about a circuit like Assen – but yeah, then this for the bike means that we'll have some bumps, but [it] is not a big problem.”