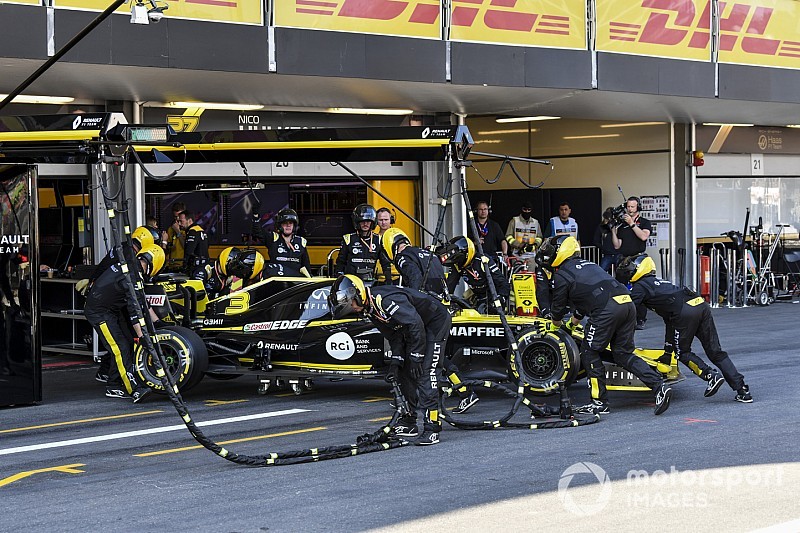 Daniel Ricciardo believes Renault would have had an “upbeat” finish to its difficult Formula 1 weekend in Azerbaijan had he not gone off and then reversed into Daniil Kvyat.

Ricciardo locked up trying to pass Kvyat for 10th into Turn 3 and then reversed into the Toro Rosso when trying to get out of the escape road, having failed to notice Kvyat was still behind him in a “panic”.

Though he had “fun” in the midfield before the error, Ricciardo was preoccupied after the race with costing his team a likely points finish and said Renault “deserved more”.

“We were starting to bring a nice rhythm to the race,” said Ricciardo, who has been given a three-place grid penalty for the Spanish GP. “We’ll take positives, but I just feel bad for the team. It was just a silly mistake.

“All weekend we haven’t really been on it. That’s why getting into the points would have been a fairly good recovery for us. That’s why I’m gutted not to pull that off.

“It looked like we had pretty good pace on that medium, on the soft we struggled at the beginning.

“If we finished the race we would have been quite upbeat about it.”

Kvyat and Ricciardo were 14 seconds behind the McLarens at the time of the incident, but six seconds clear of Lance Stroll.

The Racing Point driver went on to finish ninth, a result that Ricciardo should have earned and would have put him 10th in the drivers’ championship and Renault sixth in the constructors’, one point behind Stroll’s team.

Instead, Ricciardo is only 13th in the standings and has scored points just once in his four races with Renault.

Meanwhile, Renault is seventh in the constructors’ championship on 12 points, five behind Racing Point and six behind fourth-placed team McLaren.

Nico Hulkenberg finished the Baku race a lonely 14th, ahead of only the two Williams drivers.

“We finally managed to recover an acceptable competitiveness level during the race for Daniel but it would never be the case for Nico.

“Overall, the first stint of the season has been disappointing, but if we manage to get all things in order we can have a decent competitiveness level as demonstrated on several occasions.

“We must absolutely see the start of the European season as an opportunity to reset.”

Ranking F1's most and least improved teams in 2019