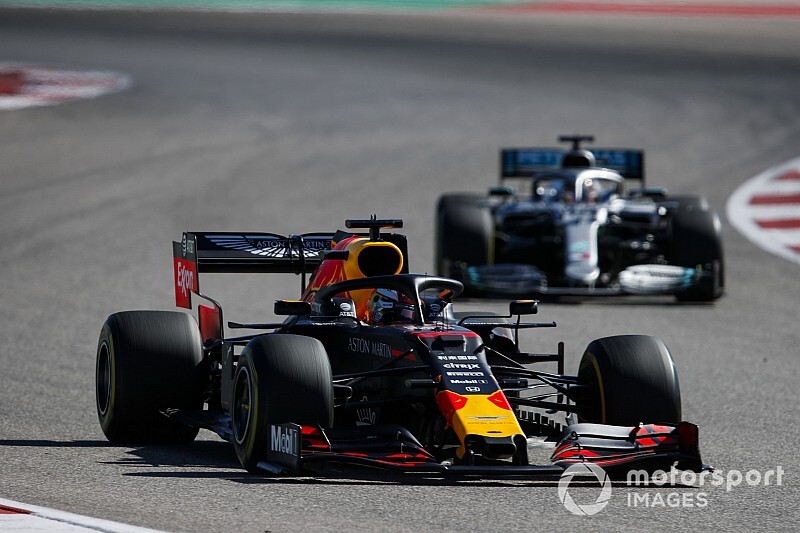 Max Verstappen's bid for victory in the United States Grand Prix was hurt by him picking up floor damage early in the race.

The Dutchman was Mercedes' main challenger in Austin but just missed out on being able to take second place from Lewis Hamilton on the final lap.

After the race, however, it was discovered that the balance of Verstappen's car had been affected by a broken floor, although the team was not sure what caused it.

Red Bull team boss Christian Horner said: "We had a pretty decent weekend, qualifying within a few hundredths of the pole, but we have lost a big chunk of the rear floor quite early on in the race.

"We damaged the front wing endplate with a touch at the first turn, and then we have had some rear floor damage which I don't know if that was the result of that or running wide at the first turn.

"But from about lap five onwards we saw a drop in load and there is a big hole in the floor that is missing."

Verstappen said the floor damage caused his car to behave in a "weird" way that he had not experienced before.

"I was just struggling with some weird oversteer in the car," he explained.

"Initially, they said it was my front wing, which had a little bit of damage but after the race I looked at the car and I was missing a big piece of my floor in front of the rear tyre, so that definitely cost me a lot of lap time today.

"I don't know when it happened, but already quite quickly into the race I had this weird behaviour from the car, which I had not felt before. So that's a bit unfortunate and otherwise I think we could have been stronger."

Horner said that the biggest consequence of the floor damage was not lost laptime, but that it affected the car's balance which had consequences in terms of tyre management.

"It is difficult to quantify the performance, but definitely, it made us slightly heavier on deg because the balance shift was quite significant," he said.

"Max was obviously closing down Lewis at the end of the race there, as Lewis looked like he was running out of tyres. But then unfortunately the combination of backmarkers and yellow flags, it muted the race right in the last couple of laps."