Williams will have a new driver pairing for 2005 -- presuming the Jenson Button saga is resolved in its favour -- and technical director Sam Michael said the team is excited about the prospect. Williams has been a little lacklustre this year, ...

Williams will have a new driver pairing for 2005 -- presuming the Jenson Button saga is resolved in its favour -- and technical director Sam Michael said the team is excited about the prospect. Williams has been a little lacklustre this year, perhaps partly because its two current drivers are leaving at the end of the season. But Michael is looking forward to fresh motivation with Button and Mark Webber in 2005. 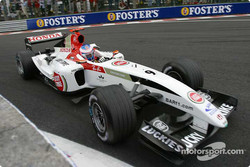 "I think Mark and Jenson will be a fantastic combination, and that's why we're excited about having them next year -- they're both big motivators," he said in an interview with AtlasF1.

Both men have a few years in F1 under their belts; Button debuted with Williams in 2000 and Webber with Minardi in 2002. The pair have also worked together before, when Button was driving for Benetton in 2001 and Webber was the team test driver.

"They know how Formula One works and what they have to do to push and win and it's something that we're looking forward to starting as soon as possible -- they're very much WilliamsF1 type drivers," said Michael.

The pairing of Button and Webber is anticipated to be one of the most competitive on the grid in 2005 -- and the competition between the two is expected to be intense. They have both said they are pleased to be working together in the future but there will be no shortage of rivalry.

"Jenson and Mark have both already supported each other and said 'this guy is the best team-mate I could have'," added Michael. "I don't expect them to be mates and go to the cinema together or anything like that, but I'm sure they will be fiercely competitive."