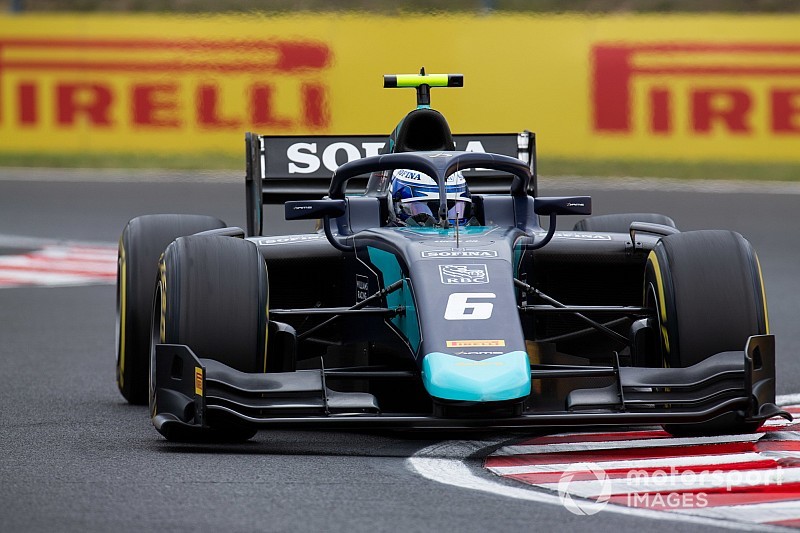 The key move of the race was done at the start, as polesitter de Vries locked up and ran wide, and Latifi was able to snatch the lead at the exit of the corner.

Latifi then showed incredible longevity on the red-walled soft Pirelli tyres, and even though de Vries attempted the undercut, the Canadian held onto the lead.

The DAMS driver then had a scare when de Vries closed in around 12 laps into the 34-lap race because of traffic. But Latifi passed Juan Manuel Correa at Turn 2, which provided welcome respite, and pulled three seconds clear in the following two laps.

Latifi retook the lead on lap 29 after those on the alternate strategy had pitted, and had nearly seven seconds in hand over de Vries as he held on for his fourth win of 2019.

Renault junior Jack Aitken had made a lightning start from seventh to fifth, and then jumped both Mick Schumacher and Luca Ghiotto during the pitstops to take a net third.

Ghiotto (Virtuosi) appeared to close in momentarily after the pitstops, and put the Briton under pressure once more at the end, but Aitken weathered the storm to take the final spot on the podium.

Sette Camara passed Matsushita in the final five laps, making the most of the Japanese driver's unsuccessful move on Ghiotto at Turn 1.

But then VSC infringement penalties changed the order as Ghiotto dropped from fourth to sixth, ahead of King, who was also penalised.

King had been charging through the order having run the slower medium tyre early on, and passed Matsushita for sixth just before the safety car.

With the penalties, Sette Camara took fourth ahead of Matsushita, Ghiotto and King.

Schumacher (Prema) had been with Ghiotto and in the battle for a podium mid-race, but slipped back three-quarters into the race seemingly struggling for tyre life.

He was caught napping at the virtual safety car restart on lap 22 of 37 by Matsushita, and finished eighth on the road behind the Japanese driver.

UPDATE: The penalties for Ghiotto and King were subsequently rescinded, reinstating the pair in fourth and sixth respectively.

“In a post-race hearing, the stewards discussed the incident in detail with the two drivers and examined footage from the MP Motorsport [King’s] car.

“They found the situation to be relatively unique, as four cars had been running in a tight pack in a high-speed area prior to the incident and there was oil on the track from the incident that brought out the safety car.

“The stewards found that it would have been quite difficult, if not almost impossible, to slow down quickly enough without potentially causing a major incident.

“As such, in the interest of fairness, the stewards found the normal five-second penalty to be inappropriate and have removed it.”