Mexico City ePrix: Abt gets first win, disaster for Rosenqvist 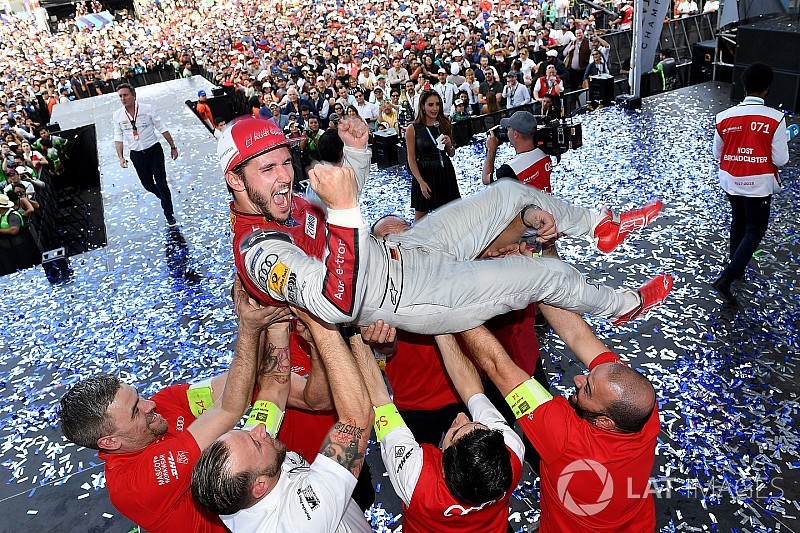 Daniel Abt scored a maiden Formula E victory in the Mexico City ePrix, as Felix Rosenqvist's title hopes took a knock as the Swede failed to finish.

Poleman Rosenqvist maintained his advantage in the early laps, and had pulled a small gap over the rest of the field before his Mahindra mysteriously lost power halfway through the opening stint.

That gave Turvey a lead of nearly four seconds over the rest of the field, although that was cut to less than two after Abt passed Sebastien Buemi for second place at Turn 1 as the Swiss ran wide.

The leading group all pitted together on lap 24, and a quicker stop for Abt allowed the Audi driver to emerge comfortably ahead of Turvey's NIO machine.

From there, Abt was able to quickly open a gap over the opposition, the German eventually taking the chequered flag by a margin of 6.3s.

His victory made up for his disqualification in Hong Kong last year - where he finished first on the road only to have what would have been a maiden FE win taken away for a technical infringement.

Vergne's position at the top of the standings was strengthened by nearest rivals Rosenqvist and Sam Bird both failing to score, the Techeetah driver now holding a 12-point buffer over Rosenqvist.

Mitch Evans made it two Jaguar drivers in the top six, ahead of Antonio Felix da Costa (Andretti) and Edoardo Mortara (Venturi).

Abt's Audi teammate Lucas di Grassi battled his way from 20th and last on the grid to finish ninth, with fastest lap giving the reigning champion his first three points of the season.

Alex Lynn claimed the final point in 10th in the best of the DS Virgin Racing cars.

Early leader Rosenqvist made an early switch to his second car after his loss of power, but ended up having to retire 13 laps from the finish.

Mahindra teammate Nick Heidfeld was also a non-finisher with similar issues, while the other retirement was Nicolas Prost after a clash with Bird, who ended up 17th.