One of the most intensely discussed topics amongst Formula 1 fans today is without a doubt the new 2009 technical regulations, and the influence they have on the front and rear wing design. Detail of the new McLaren Mercedes MP4-24. Photo ...

One of the most intensely discussed topics amongst Formula 1 fans today is without a doubt the new 2009 technical regulations, and the influence they have on the front and rear wing design. 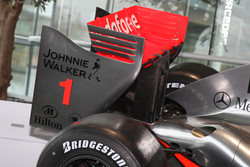 Detail of the new McLaren Mercedes MP4-24.
Photo by xpb.cc.

Surveys conducted in 2006 already revealed that Formula 1 fans around the world would like to see more overtaking manoeuvres to make the races more exciting. Most of the overtaking took place in the pit lane during a pit stop -- and the fans didn't like that. In 2008 the races at Valencia and Singapore made one thing clear: they were boring as a result of a lack of overtaking.

During the 2006 season, the FIA introduced the Centreline Downwash Generating (CDG) wing, a rear wing that would make it easier to overtake, and according to the FIA it would be introduced in 2008. But after tests in the Italian Fondtech wind tunnel, it became apparent there were some major flaws in the design and the CDG wing idea was abandoned. And a wing that would make overtaking easier was not a very popular idea amongst F1 fans in 2006.

As a result of the findings of the OWG the 2009 rear wings are smaller and mounted higher, the front wings are wider (1800mm) and mounted lower. Winglets and bargeboards are banned, and the rear diffuser is steeper.

But what is truly revolutionary in Formula 1 is the adjustable front wing: the angle of the flaps of the wing can be changed three degrees up or down by the driver, up to two times per lap. The movement of the wing will be controlled and monitored by the software of the ECU. As the ECU is controlled by the FIA, the fans don't have to worry about unlawful use of the wing adjustment; it is impossible to adjust the wing more than twice per lap.

Just to illustrate how revolutionary this idea is: the first wings that appeared in Formula 1 in 1969 were mounted very high on the car and the drivers could adjust the angle to get more downforce in corners and more speed on the straight. After a number of accidents and failures - the first wings were also very flimsy - the adjustable wings were banned. From that moment on, movable aerodynamic devices were a complete taboo, they were even considered to be "unsportsmanshiplike" and therefore a definite 'no-go" in Formula 1.

The flexing wings we saw during the 2006 season were also a no-go -- the FIA ruled they were also movable aerodynamic devices -- and were banned. And now the adjustable front wing is part of the package to make overtaking easier. Things change rapidly in the fast lane of Formula 1.

Ugliness is in the eye of the beholder

Soon after the first photos emerged of the BMW-Sauber and the Williams cars testing at Barcelona with the new aerodynamic features, many fans were 'shocked' to see what they considered to be the ugliest F1 cars ever. There have been headlines like: New look for F1 2009... and it's ugly!" or "Ugly cars and new stars" or "An ugly season for F1".

Robert Kubica said in an interview: "We definitely all agree that the appearance of the cars is not really the best", - which is to some people the understatement of the year - and BMW test driver Christian Klien said: "it's the worst Formula One car I have ever seen". 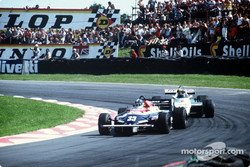 In reality, the very high position and shape of the new rear wing isn't very far off from the rear wings on F1 cars in the early 90's. If you take a look at the McLaren MP4/4b or MP4-6 (1990 and 1991) you will see the same high mounted rear wing, and a very wide front wing.

With so many changes teams had to come up with a completely new car design, rather than presenting an evolution of their 2008 car. The return of the slick tyres and the introduction of KERS also had a significant impact on the design of the car.

But the goal of all car designers for 2009 remains the same as ever: maximize downforce and reduce drag, all within the framework of the 2009 regulations. It is very refreshing to see how designers use different approaches to achieve that, although the new regulations impose restrictions regarding the design of the car and the wings, there is still plenty of room for a designer to play around with.

Before we pass our judgment on "Good, Bad or Ugly", let us make a virtual tour through the paddock to see what 2009 has in store for us.

Ferrari was the first team to launch their 2009 car at Mugello, Italy. The car has been named Ferrari F60, referring to the 60 years of Ferrari presence in the Formula 1 World Championship. The suspension system and the whole layout of the car have been redesigned in compliance with the new rules. Like on all the new 2009 cars, the high position of the rear wing and the very wide front wing are the most significant changes compared to the 2008 Ferrari. The bodywork looks very sleek without bargeboards and vanes. 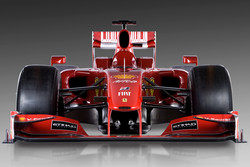 Although the front wing span has increased, Ferrari managed to design it in such a way that it doesn't look as massive as the front wing on the new BMW-Sauber we saw during testing. The rear wing endplates have three slots to reduce drag, something we see on all new cars. The sidepods have been moved further to the back, they are wide at the front and narrow at the end - like the shape of a bottle. The shark fin shaped engine cover as we have seen at the end of 2008 has gone. The only things that look a bit odd are the mirrors and the way they are mounted on the car.

The car is fitted with the KERS system designed in corporation with Magneti Marelli and is mounted directly on the engine. it should provide the driver with an additional 60kW power boost for a maximum of 6.7 seconds, but it is unknown if it will be operational before the first race in Australia.

Next to reveal their new car was drivers' title defender McLaren Mercedes. The new McLaren still has the looks of its predecessors, also thanks to the livery, but the aerodynamics have completely changed.

The front wing has two flaps which can be adjusted with a switch on the steering wheel. The sidepods look very similar to the Ferrari sidepods, wide at the front and narrow at the end. There are two small bargeboard-like appendages in front of the sidepods. The engine cover still has a tail fin which helps to direct the airflow over the rear wing. Only the front wheels are fitted with wheel fairings.

Formula 1 sponsors falling: Bank on it