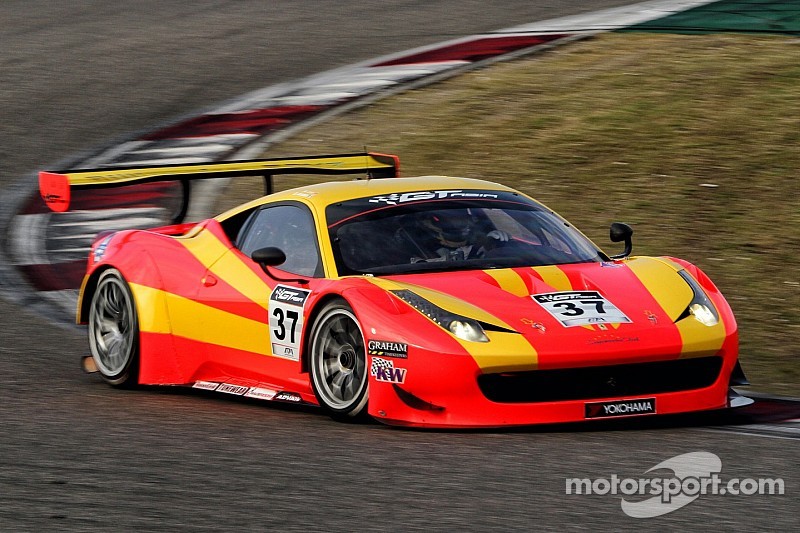 A day where the points leaders struggled to make the most of their chances...

Local team BBT have emerged as serious title contenders for this years GT Asia Series title after setting the top qualifying time in both sessions at Shanghai International Circuit on a day where the points leaders struggled to make the most of their chances ahead of the two 40-minute races that constitute the penultimate round of the championship.

With just two ten-minute sessions to set the grid for rounds 11 and 12 of the championship, it was the ‘Spirit of Race’ prepared Ferrari 458 Italia of Anthony Liu and Davide Rizzo who added a single valuable championship point to the their series totals moving to within striking distance of Clearwater Racing’s outright and adjusted points leaders.

“I think we just had everything come together at the right time,” Rizzo shrugged afterwards, although he was clearly playing down the advantage the local team have on the shortened 4.590-kilometre 12-turn layout.

But the car apart from that felt fine, to be honest I think if we can sort that one thing, we’ll be good for the podium in both races!

Adding to their weight as serious title contenders, the two Ferrari drivers set times that were just six one-hundredths apart, making them the closest two-driver pairing in the series, something which will weigh on the minds of their opponents as strategy comes into play across the two races.

Whilst the performance of Liu and Rizzo was nothing short of impressive, it was aided by difficulties incurred by their championship rivals.

Eliminated during official practice on Thursday afternoon, the outright points-leading McLaren MP4-12C of Hiroshi Hamaguchi and Rob Bell was replaced overnight by a secondary McLaren provided by rivals AAI from Taiwan, although just substituting a car was not a simple task, with every other team in the field having to agree to the change.

That forced the Clearwater Racing duo to approach every team in the series for approval to run, a situation that was made much simpler by the respect that the paddock has for the popular Hamaguchi, something which ultimately allowed Rob Bell to take his position in qualifying in the opening ten-minute session.

“As a group, Clearwater Racing has to pay respect to every team in the GT Asia Series paddock,” Team Principal Arjuman Kulasegaram admitted. “Additionally, we can’t thank AAI enough for their incredible gesture in providing us their spare car. Unfortunately it had suffered a mechanical failure during their last event – which was why it was their spare - so our team had to work all night to make a gearbox change, but we’re here thanks to them, and that’s what matters - we’re very grateful.”

I don’t think there’s any question we have the fastest car in the field, but with just ten minutes to record a time, we were thwarted by traffic,

Unfortunately though the dramas for the points leaders was to continue, Bell returning to the pits under red flag conditions just a minute out from the completion of the opening session with broken rear suspension as a result of contact with a slower car.

“It was my error entirely,” the frustrated Englishman explained.

“I was closely following one of the Audis when we caught a slower GT-Cup (China) car into the first few corners.

“I should have seen it coming, but I think as the Audi pulled out to pass the BMW, he might have felt the slower car hadn’t seen him, so he was forced to stop harder than I expected. I jumped hard on the brakes to avoid hitting the Audi and went for a gap between the two, but as I got there, the gap disappeared and I hit the BMW.”

Sadly both cars suffered session-ending damage, the BMW eliminated after a fire started as the car came to a stop in the gravel trap, fortunately without any harm to the driver, whilst Bell was able to return to the pits.

“You couldn’t make this stuff up,” Kulasegaram shrugged. “The damage will prevent Hiroshi from qualifying, so he’ll have to start rear-of-field for his race, we’re just happy that the BMW driver got out okay.”

With the session over, it was Liu who had ended the session on top of the timesheets, the winner of the opening two rounds of the championship in South Korea providing he and team-mate Davide Rizzo the perfect platform to attack the points leading Clearwater team ahead of the final round in Macau in four weeks time.

Second fastest - just three one hundredths slower than Liu - was Thursday’s pace-setter, Craft-Bamboo Racing’s Richard Lyons, the Aston Martin driver though admitting he hadn’t made the most of the session.

“I don’t think there’s any question we have the fastest car in the field, but with just ten minutes to record a time, we were thwarted by traffic,” the Englishman admitted.

“I was out first, with Dasheng [Zhang] on my tail, and as we came around to start our first flying lap, the final few cars were just coming out of pit lane. I think I caught four on my first lap, and maybe five on lap two, and avoiding lapped cars isn’t the best way to record a quick lap.”

Lyons’ view was echoed up and down pit-lane, with the bulk of the teams admitting a similar fate, not the least of those being the adjusted points leaders, Keita Sawa and Mok Weng Sun, the duo both suffering in traffic, Sawa finishing his session with the eighth fastest time (he was well up on his best time on his final flying lap which was ultimately red-flagged), Mok the seventh fastest.

“What can you do,” the two-time series champion shrugged post-session.

Dasheng Zhang - like Lyons was also hampered in his efforts to move forward, the Carrera Cup Asia regular though still continuing on his stunning practice form on his series debut, claiming third in session one, car-owner Chao Li an impressive sixth in session two.

German star Chris Mies was fourth in session one, the Audi pilot admitting to an over-steering issue during his session, something which also impacted car-owner Jeffrey Lee who despite the disadvantage still set the third fastest time in session two.

“We’re not sure why we had the over-steering issue, because the other three Audi R8s in the Absolute Racing stable are fine, and we certainly didn’t have any kind of issue yesterday,” Mies admitted. “But the car apart from that felt fine, to be honest I think if we can sort that one thing, we’ll be good for the podium in both races!”

Rounding out the top five in both sessions was the new Absolute Racing prepared Bentley Continental GT3, with both Jean-Karl Vernay and Gilles Vannelet setting the fifth fastest time on the team’s GT Asia Series debut, the big British built car continuing to gain plenty of attention from both rivals and fans alike.

Another team to take advantage of their local knowledge, was Max Wiser and Jiang Xin in the NB Team Aston Martin, the duo well inside the top ten in both sessions, Xin particularly impressive in Q2, putting the gorgeous V12 Vantage on the front-row alongside fellow Shanghai resident Rizzo.

In the battle for GTM honours, rising open-wheel star Matt Solomon trumped the field in Jacky Yeung’s Audi during Q1 with a best of 1:51.195, a second and a half clear of the points-leading Taiwan Top Speed Racing Ferrari Challenge of George Chou and Thomas Fjordbach.

Chou could only manage the fourth fastest time in Q1, although Fjordbach fought back in Q2 to set the top time in the GTM class, his time just eight tenths slower than Solomon’s benchmark, but more than two-seconds faster than rival Yeung, setting the stage for an interesting title fight across the weekend.

Dramatic opening day at Shanghai for the GT Asia Series

Three teams, two points and a GT Asia Series crown in the balance