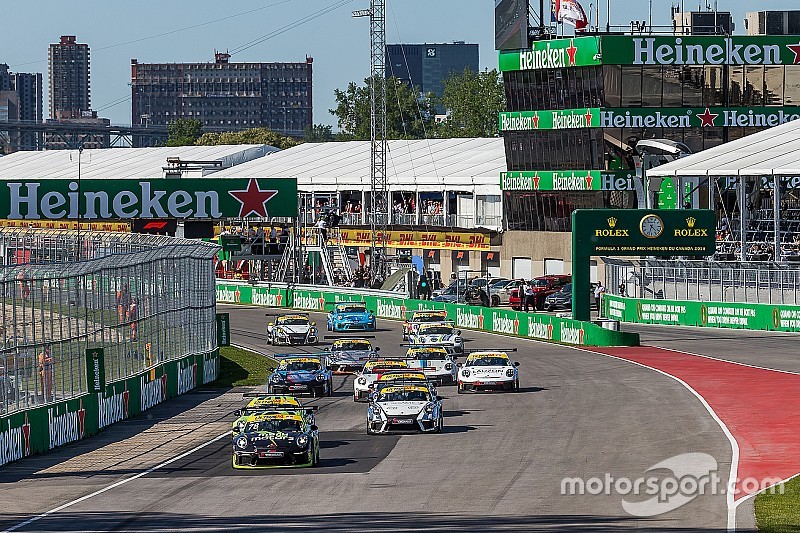 The Porsche GT3 Challenge Canada staged two races during the weekend of the Canadian F1 Grand Prix in Montréal, both of them dominated by the Mark Motors Racing duo.

The drivers behaved properly though the first corners as no incidents took place. De Angelis quickly pulled away from the rest of the field, leading his teammate Robichon, Étienne Borgeat and Remo Ruscitti.

Behind them, Stefan Rzadzinski and Patrick Dussault battled fiercely over fifth place.

After a few laps, Robichon made up ground on De Angelis, and the two 911s started to run together. At the end of Lap 10, Dussault locked a wheel under braking at the end of the long Basin straightaway and had a light collision with Rzadzinski. Both drivers continued their race.

The 17-year-old De Angelis went on the cross the line in first place, winning the 19-lap race 1.54 seconds ahead of Robichon. Borgeat arrived home in third place to complete the podium. Ruscitti made it to fourth, beating Rzadzinski, Jeff Kingsley and Dussault.

“It really well,” said De Angelis. “Really good pace by Zach as well, so I think we have some work to do tonight. There’s never perfection, so there’s always a little bit more to find, but awesome effort by everyone at Mark Motors and everyone at Best Line. It’s a long series, so winning one race isn’t a huge deal but I’m really, really happy about it and a win’s a win.”

The Mark Motors Racing drivers again took the start of the race on the front row. And they immediately entered in a close fight.

On Lap 2, Ruscitti pitted with a problem with the right rear corner of the 911. He was forced to retire.

The leading duo made of Robichon and De Angelis extended their lead to seven seconds after just five laps. Rzadzinski ran in third place ahead of Dussault, Borgeat, Kingsley and Michael Di Meo.

After 10 laps, the fight intensified for the lead with the two front Porsches running nose to tail. On Lap 15, their advantage over their rival was stretched to an impressive 20 seconds.

At the end of the penultimate lap, Dussault, in fourth place, tried to pass Borgeat on the inside at the end of the long straight. Borgeat locked a few wheels while Dussault brakes as hard as he could. Both cars eventually missed the chicane, ran straight and rejoined the track, with Dussaut in front.

The chequered flag saluted Robichon’s victory. His teammate De Angelis finished second ahead of Dussault, but the latter received a 23-second penalty for having left the race track and gaining an advantage.

Borgeat gained a place and climbed on the podium in third place. Rzadzinski was classified fourth ahead of Kingsley, Di Meo, Michael Fantin and Dussault.

“It was really an incredible race with Roman,” said Robichon. “I kind of had a feeling we weren’t going to have the same pace as him, so I saw an opportunity at the start and we took it. He hounded us the whole race and every single time I made just the smallest of mistakes, he was right there. We were kind of going back and forth there a little bit.

“I have to give (Roman) full credit because I think he was a little bit faster than us. He’s had the hand on us all weekend and I think that continued in the race today. I just focused on not making mistakes and doing my best to keep him behind me.”