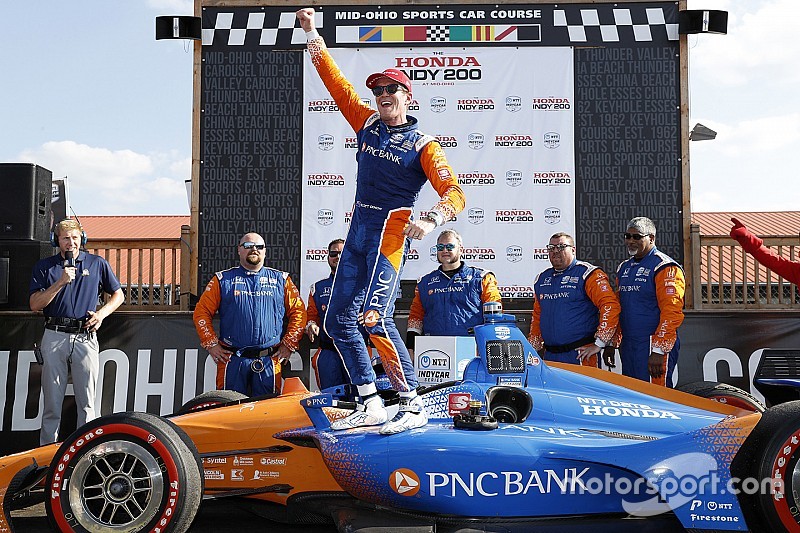 Scott Dixon on worn tires held off Chip Ganassi Racing-Honda teammate Felix Rosenqvist by less than a tenth of a second to score his sixth Mid-Ohio win, the 46th of his career, while a final lap spin for Josef Newgarden closed up the championship battle.

On the run down to Turn 4, where the start takes place, polesitter Team Penske-Chevrolet’s Will Power got the jump on the Andretti Autosport-Honda of Alexander Rossi, with Josef Newgarden tucking his Penske easily into third. Behind, Chip Ganassi Racing’s Felix Rosenqvist, after taking a look at the outside of Simon Pagenaud in the third Penske, had to back off, lost momentum and was passed by Bourdais. Further back it was a disaster for Arrow Schmidt Peterson Motorsports-Honda team, as Takuma Sato bounced James Hinchcliffe off the track with a bent rear toelink, sending them both to the pits, while Marcus Ericsson was also involved, and suffered a right-rear puncture and a bent front toelink.

Graham Rahal, who had been passed by Marco Andretti for 13th, committed to a three-stop strategy, stopping on Lap 9. So too did Carlin-Chevrolet’s IndyCar returnee, RC Enerson, and Andretti Autosport’s Zach Veach.

From Lap 8, Rosenqvist started pressuring Bourdais who appeared held up by Pagenaud’s Penske. On Lap 13 the two Frenchmen, pitted Pagenaud for new reds, Bourdais for used blacks, while Herta, Ed Jones of Ed Carpenter Racing and Max Chilton of Carlin also came in.

Newgarden surrendered third by pitting on Lap 15, while simultaneously Herta dived up the inside of Bourdais at Turn 2’s Keyhole fast hairpin, made contact, and spun the Dale Coyne Racing with Vasser-Sullivan.

Up front on Lap 18, Power was leading Rossi by 1.4sec, but the pair were being chased hard by Rosenqvist and Dixon whose primary tires were working well. Rosenqvist got ahead of Rossi into Turn 4 to claim second place on Lap 18, and a lap later Dixon was through too.

Rosenqvist wasted little time in closing up on Power and as he applied the pressure, Dixon inched to within two seconds of them. Rossi was now 3.3sec down on Dixon and coming under pressure from Pigot, also on a two-stop strategy.

Finally on Lap 25, Rosenqvist got a better exit out of Turn 2 and hit the push-to-pass, drew alongside Power along the back straight and passed him around the outside of Turn 4. Meanwhile Pigot got past Rossi and immediately pulled away. Rossi stopped at the end of Lap 26. It was early for a two-stopper. Were he and tactician Rob Edwards banking on yellows, or could they really make it to the end with just one more stop? Ferrucci and Pigot pitting from sixth and fifth next time by suggested they could.

Rosenqvist, holding a 2.6sec lead, pitted at the end of Lap 28, leaving Power and Dixon still battling up front for one more lap before they both pitted. The Penske emerged still ahead of the Ganassi car, but the pair were passed by Pigot on the alternate compound Firestones. Rosenqvist (reds) thus had Bourdais, Harvey and Pigot as a buffer back to Power.

Dixon on reds was now haunting Power on blacks and they had a wheel-rubbing battle through Turns 4 and 5, on Lap 31, with the Penske driver holding on. However, two laps later, there was no denying Dixon and this time he went down the inside of Power at Turn 4 to claim the spot.

Up front, primary-tired Josef Newgarden was leading alternate-tired Pagenaud by a second, with Hunter-Reay a further second behind, just ahead of Herta. However, Pagenaud and Herta made their second stops on Lap 37, and RHR stopped next time by, as did Ferrucci. Bourdais then made his second of three but was pinged for a pitlane speed violation and had to return to the pits.

Rosenqvist was running second, only 5.9sec behind Newgarden, and provided he could stick to his two stop strategy, he appeared to have this race in the bag. He was 11sec ahead of Pigot, 12 ahead of Dixon and 17 ahead of Power.

Newgarden hit the pits on Lap 41 for another set of scuffed blacks and a problem with the refueling dropped him behind Power, Rossi and Hunter-Reay. He rejoined just ahead of teammate Pagenaud, and the pair ended up banging wheels into Turn 4, Josef holding Simon out wide while he got his blacks up to temp.

Rosenqvist pitted from the lead on Lap 46, now clearly committing to a three-stopper. He would re-emerge behind Power who had been setting as fast laps as he dared while on a two-stop strategy. Pigot meanwhile, also pitted, now apparently going for a three-stopper.

At Lap 52, Dixon on reds was running 12.5sec ahead of Power on blacks, who was now coming under severe pressure from the fresh(er) tired Rosenqvist. Rossi was a further two seconds back with Hunter-Reay as a handy buffer between himself and his title rivals Newgarden and Pagenaud, with Herta in ninth.

Rosenqvist muscled alongside Power through Turns 4, 5, 6, 7 and finally completed the pass at Turn 8. Second place was his.

Rossi made his second and final stop at the end of Lap 58 for fresh primary tires; Dixon stopped next time by, exchanging reds for reds; Power pitted on Lap 60 and took on fresh primaries, emerging ahead of Rossi. However, Newgarden had put in some strong laps once released by Rossi’s slowing Andretti car pre-pitstop, and when Josef emerged from his third and last stop at the end of Lap 62, he came out ahead of Power and Rossi. This pair were, however, able to pass Pagenaud.

Rosenqvist pitted from the lead at the end of Lap 66.

Thus with 23 laps to go, all the frontrunners had made all their scheduled stops, and Dixon led on red tires by 9sec ahead of Rosenqvist on blacks, with Hunter-Reay – who had set strong in-laps once Rossi stops and also had a great pitstop – 11sec further back, with Newgarden, Power, Rossi, Pagenaud, Pigot and Herta running around 1.5sec apart.

With 15 laps to go, Rosenqvist had chiseled his teammate’s lead down to seven seconds and with 10 to go the gap was 5.5sec but there were four battling backmarkers between them and Rosenqvist had hardly any push-to-pass left to clear them.

Hunter-Reay was 9sec adrift, and less than 2sec clear of Newgarden who had Power – now 5.5sec ahead of Rossi – hunting him down with personal fastest laps. However, an error on Lap 83 saw that charge effectively end.

Dixon had to ease back now in the closing six laps, nursing his reds to the checkered flag, thankful that the lapped cars of Andretti, Sato, Chilton, Leist filled the mere 2sec gap he had over teammate Rosenqvist. Felix managed to depose Leist with four laps to go, and on Lap 87 he passed Chilton, too. The issue was further confused by Sato and Andretti battling and swapping places, although Sato then ducked into the pits.

When Rosenqvist muscled by Andretti through the Turns 5-6-7 sequence, the hunt was on, and he closed rapidly on Dixon.

Rosenqvist tried a half-chance at the Keyhole but lost momentum when he climbed up the curb on corner entry to avoid impaling his teammate’s car which had appeared to leave a gap that was IndyCar-sized. Dixon kept all doors closed for the remainder of the lap and held on to win by a mere 0.0934sec – the third closest road/street course finish in IndyCar history.

There was yet more drama behind though. Hunter-Reay and Newgarden had closed right up on the lead battle, and just as Rosenqvist was avoiding crashing with Dixon, Newgarden lunged for the inside of Hunter-Reay. Penske left-front made contact with the rear of Hunter-Reay’s car and the championship leader looped into a spin, into a sandtrap and out of fourth. Rossi couldn’t believe his luck. He came home fifth behind Power, and saw what should have been a 34-point deficit to Newgarden at race’s end slashed to just 16.

Pagenaud held off Pigot and Herta to the checkers while local boy Rahal held off Bourdais to claim ninth.