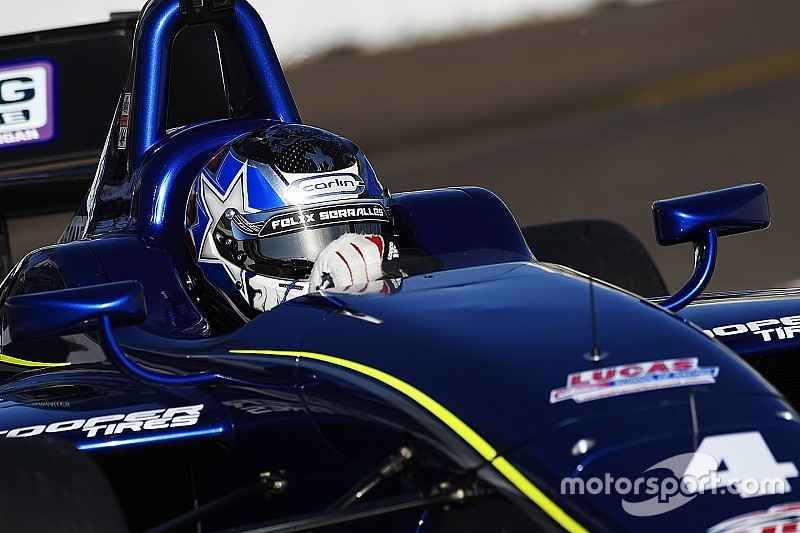 Driving for the British team that won both Lights races at the track last year with Ed Jones, Serralles was second for much of Saturday's race before taking over out front when Veach slowed dramatically.

Veach jumped up to second, and then grabbed the lead by Turn 4, as Kaiser tumbled back to fourth behind Serralles and Scott Hargrove.

Veach – who won here in 2014 – then pulled out a 1.5s lead by one-third distance, and by the halfway mark the big battle was for second as Hargrove began to exert pressure on Serralles.

However, the race leader then appeared to lose drive as he exited Turn 4 – reporting to his team that “the car just shut off” – which allowed Serralles to pass him for the lead.

Veach then clipped the wall at Turn 10 as Hargrove fought his way past to second.

Meanwhile, Veach’s car repeatedly kept shutting down, and despite his brave efforts to soldier on, he retired with a couple of laps remaining.

“I cycled it a couple of times but it kept happening,” said Veach. “I feel sick to my stomach right now. This has made me twice as hungry for tomorrow.”

With Serralles unchallenged up front, Hargrove and Kaiser battled to the finish over second, with the Team Pelfrey driver holding on.

Newcomer Santiago Urrutia was a distant fourth, ahead of teammates RC Enerson and Andre Negrao, with Rosenqvist and Dean Stoneman.

“I just pushed like hell, and finally I’ve got a win at a street circuit,” said Serralles. “I tried to pressure Veach, but then backed off a bit to look after my tires.”

Shelby Blackstock was in contention for a solid result when he locked up and went off at Turn 14, and, combined with Veach’s issues, this promoted Juan Piedrahita and Jones into the top 10.

Tomorrow's race will see Veach line up second, with teammate Rosenqvist on pole.