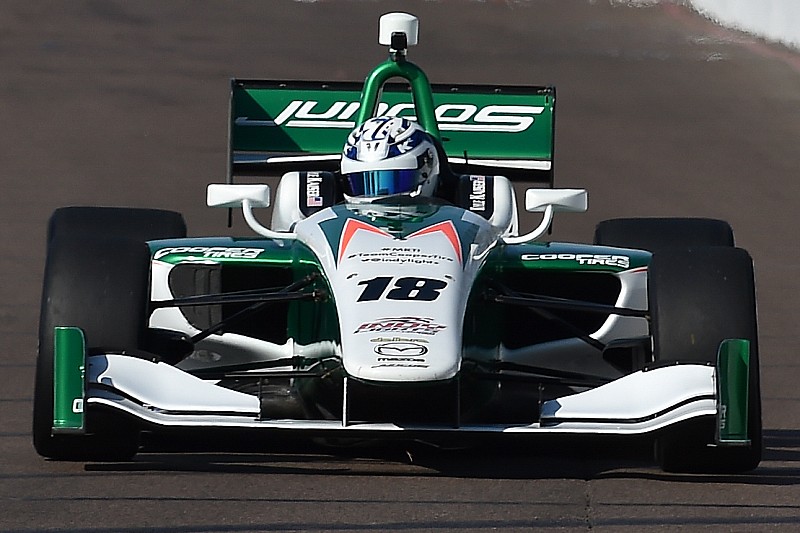 Championship leader Kyle Kaiser struck back at those who thought Matheus Leist had the championship momentum by controlling the first Indy Lights race from pole to checkered flag, as his rival shunted.

Juncos Racing’s Kaiser made a strong start from pole position, Zachary Claman De Melo shuffled past Carlin Racing teammate Leist for second and these three were chased by Belardi Auto Racing’s Santi Urrutia, Dalton Kellett of Andretti Autosport, and a third Carlin car, that of Neil Alberico. Behind them came Juan Piedrahita of Team Pelfrey and Aaron Telitz’s Belardi car.

On Lap 4, Leist, who has won three of the last four Lights races, cracked under intense pressure from Urrutia and spun into the tire wall at Turn 8. The unsighted Nico Jamin of Andretti Autosport caught the tail end of the spun Dallara IL15 Mazda. Two strong drivers were eliminated in a matter of seconds.

At the restart Kaiser was untouchable and Urrutia passed Claman De Melo for second around the outside of Turn 3 and started trying to hunt down Kaiser.

Behind them, Herta pulled off some brave maneuvers through the Turn 4-5-6 complex to elbow his way past Telitz and into fifth. Then Kellett, who’d loosened his front wing on the back of Urrutia just before the restart, relinquished fourth to his teammate., then held up Telitz for a lap to give Herta some breathing space, before pitting. Generous driving from the crestfallen Canadian.

Three seconds ahead of Herta, and 3.5sec behind leader Kaiser, Urrutia was struggling to hold off Claman De Melo and had to relinquish P2 to the Carlin car on Lap 14. By this time, Kaiser was already 4.5sec up the road and the lead battle appeared to be over once Claman de Melo proved unable to close on the championship leader even now he had a clear track ahead.

Third-placed Urrutia’s next focus was the rapidly closing Herta, but some smart car placement kept the Andretti driver at bay as they both started inching closer to Claman De Melo, though ultimately to no effect. Kaiser, Claman De Melo, Urrutia, Herta was how it ended.

A dozen seconds behind Herta, Telitz was fifth, five seconds ahead of Piedrahita. The Pelfrey driver was able to hold off Andretti’s Ryan Norman in the closing stages, the American getting so frustrated he spun off and relinquished seventh to Nicolas Dapero in the second Juncos car, as well as eighth and ninth to Carlin pair Neil Alberico and Garth Rickards.