Everything To Play For At Silverstone For Walker 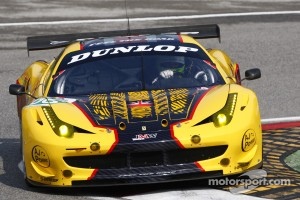 The UK round of the Le Mans Series – the Autosport 6 Hours of Silverstone – takes place this weekend so James Walker will be on track in the JMW Motorsport Ferrari 458. After the last race at Imola ended in the pits due to a technical problem, James and his team mate Rob Bell are out to repeat their Paul Ricard victory at a circuit they both know so well.

“We need to come back strongly this weekend,” said James. “I’m up for it, Rob’s up for it and the team is up for it. We must put in a strong performance at the final two races to make sure we get the best possible championship finish. Obviously it would be great if we could win at our home race.”

“The home race is always a good event,” he continued. “I will have some of my sponsors there and the guys will come over from Jersey to support me too. Their expectations are high and so are mine.”

The JMW Motorsport team tested at Pembrey recently and made the most of some uninterrupted track time, as James explains:

“The thing that has been lacking for me this year is time in the car so it was good at Pembrey to try lots of different things and really get to grips with everything. I think this will help us a lot when we get to Silverstone.”

Racing gets underway on Sunday at 1135hrs (BST). You can also catch the action on Eurosport or at www.lemans-series.com

Every session will also be broadcast live by www.radiolemans.com

Stevens starting to “prove himself” with Le Mans Am win