The team’s cars, #12 and #13, were dedicated to two specific working programmes focused on setup and fuel efficiency.

The official Test Day for Le Mans 24 Hours was a productive one as the Swiss team increased their understanding of their new REBELLION R-One LMP1-L cars on the particular and unique Le Mans layout. The team’s cars, #12 and #13, were dedicated to two specific working programmes focused on setup and fuel efficiency.

The pace of the cars improved through the day as both cars reduced their lap times, the engineers and drivers were pleased with the setup changes. Both cars’ fastest laptimes were achieved during the afternoon session with a 3:31.700 for car #12 and 3:33.042 for car #13.

The endurance range of the Michelin tyres was evaluated and the team have a clearer view regarding tyre compound and construction choices for the race week. 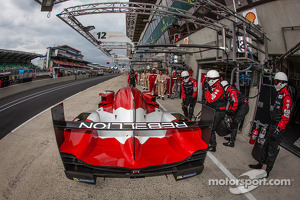 As the afternoon session neared the end, the team was in a positive mood, but a few minutes before the checkered flag, the REBELLION R-One #12 in he hands of Nick Heidfeld crashed into the wall at the entry to the Porsche curves. The German driver was not injured and got out of the car unaided, but the car suffered quite a lot of bodywork damage. Fortunately, the chassis was not damaged and the team started the rebuild of the car as the Test came to an end.

A shakedown of both cars with their race engines and gearboxes had been scheduled for Tuesday 3rd June, and that plan is unchanged.

Bart Hayden – REBELLION Racing Team Manager: “The official Test day was a generally positive one, but it’s a shame we had the crash in the final minutes of the afternoon. Fortunately Nick is okay, and the damage to the car is repairable, so it shouldn’t impact us too badly for the race. We turned a good number of laps and improvements in the cars’ performance and systems kept coming, which is nice to see. We’ve got more data now to help us prepare for the race and I’m confident that we will be further forward come race week.”

Nick Heidfeld – REBELLION R-One - Toyota #12: “As we still have a new car, we still don't really know it very well. The balance for me was not what I would really like. We clearly improved it during the weekend, but the car is still very new. We are learning things all the time in terms of fuel saving, setup or electronic systems. We are still moving forward and have some margin to the limit. In the Indianapolis curve, I lost the rear of the car going to the “S” Porsche. I'm happy that they changed the barrier there to new tech-pro type because the damage could have been far worse.”

Nicolas Prost – REBELLION R-One - Toyota #12: “We did some good work today. We progressed a lot with the car. We can still improve, but the gap to the factories still looks quite big. So far, this weekend is quite positive. I'm sure that we will improve and be closer during the race week. And who knows what could happen during the race?”

Mathias Beche - REBELLION R-One - Toyota #12: “I'm pretty happy with what we achieved in terms of work today. We gave everything we had. We improved the car consistently during the day. The car balance is now very close to what we really want. When we are in “fuel saving mode”, we clearly lose big performance, we need to be closer to the factory cars.”

Andrea Belicchi – REBELLION R-One - Toyota #13: “We finally found the nature of the electrical problems we had on the #13 car from Spa to Le Mans. We really hope that this issue is now behind us. Then, we started to work a little bit on the set up of the car late in the afternoon. It seems that we need a little tweak in the regulations because we need more performance when we are in fuel saving mode. And the gap of acceleration still remains between the factory cars and us as their hybrid systems have more power than our regular engine."

Dominik Kraihamer – REBELLION R-One - Toyota #13: “It was really nice to drive the car again. And it's always a pleasure to drive on this track. I'm happy to be part of the R-One project. The guys worked very hard to prepare for the Test day. I'm impressed by the way they solved issues of the new car. The performance of the R-Ones are a bit too far from the factory cars but, we don’t have the same facilities as them. We will push harder to be closer.”

Fabio Leimer - REBELLION R-One - Toyota #13: “It was quite a fine test day. I managed to do my ten mandatory laps and I'm now ready for the race. I learned more about the Le Mans track lap after lap and I must say that I like to drive on this track. I’m really looking forward to be at the race week.”