Trent Hindman and Riccardo Agostini made it an Imola double in the Lamborgini Super Trofeo North American's final double-header with victory in race two.

Hindman started second and spent the early stages of the race behind pole-sitter Jeroen Mul before closing in to pressure the leader.

After spending several laps trying to find a way past, Mul ran slightly deep at the Tosa left-hander, allowing Hindman to pull alongside.

They battled through the Piratella before Hindman completed the move into Acque Minerale, with the pair making light contact in the braking zone.

Hindman then edged away before Mul made his mandatory pitstop at the end of lap 12 – as a solo driver having to spend an extra three seconds in the pitlane compared to those sharing cars.

With 18 minutes to go in the 50-minute race, the safety car was deployed to allow the recovery of Supachai Weeraborwongpong’s Asia series car.

This closed up the field, but at the restart with 11 minutes remaining Agostini held on to first place – aided by having two backmarkers between him and Mul.

Agostini then closed out victory, taking the chequered flag 7.101s ahead of Mul.

Brandon Gdovic was third, finishing ahead of Katherine Legge and Michele Beretta, the latter running wide through the gravel at the Rivazza at the end of the penultimate lap while piling on the pressure and dropping back.

Behind them, the one remaining class title fight raged intensely with Edoardo Piscopo and Taylor Proto clinching the Pro-Am title by finishing just ahead of Austin Versteeg.

Versteeg had a difficult race after being shuffled down to ninth place while trying to pass Proto early on, but was with Piscopo at the restart.

He attempted to take the class lead, which would have given him the title, shortly after the restart but Piscopo held on - the pair making contact on the run to the Villeneuve Chicane.

Yuki Harata, already crowned Am champion, won the class in seventh place ahead of Emmanuel Anassis, with Ryan Hardwick taking the Lamborghini Cup win after rival JC Perez went off attempting to pass him before retiring.

Yazid/Cozzolino double up for Asia win 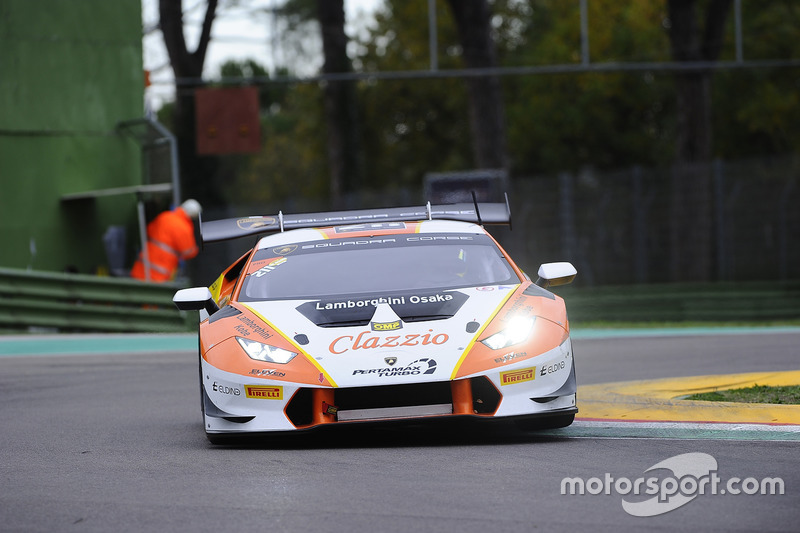 Afiq Yazid and Kei Cozzolino made it 10 wins out of 12 in the Lamborghini Super Trofeo Asia with victory in the Imola finale.

With the Asia series race taking place at the same time as the North American finale, but starting a minute later, Milos Pavlovic took the lead early on ahead of Yazid.

Pavlovic built a lead of close to four seconds by the time the pitstop window opened, with Yazid stopping immediately, having seen off the threat for second from Alberto di Folco.

This happened when they happened upon Maxx Ebenal's car, which had two rear punctures, near the pit entry and di Folco suffered minor damage as he took avoiding action.

Pavlovic handed over to Andrew Haryanto at the end of the pitstop window, holding on to the lead but being hit with a time penalty of eight-tenths of a second for falling short of the minimum permitted pitstop time.

But Cozzolino passed Haryanto after the restart to take the lead and secure victory after pulling away.