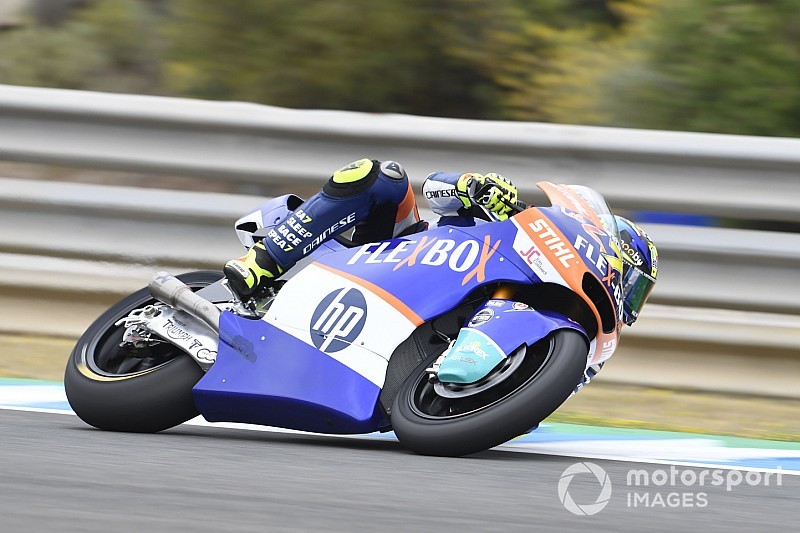 Baldassarri bounced back from a crash last time out in COTA by seeing off a challenge from Pons squadmate Augusto Fernandez.

At the initial start, the returning Fernandez passed pole-sitter Jorge Navarro and Alex Marquez off the line to take the lead, with Tom Luthi slotting into second and Remy Gardner muscling past Marquez into third.

However, Gardner then high-sided exiting the first corner, his out-of-control Kalex forcing Marquez to the floor.

Most riders somehow managed to avoid the fallout from the accident, although Dimas Ekky Pratama was also taken down by Gardner - and while his bike slid into the Turn 2 gravel alone, Dimas himself hit Marco Bezzecchi's KTM and caused the Moto3 graduate to fall.

Red flags were brought out for the accident, and the race was later restarted under the original grid positions but with the distance shortened from 23 to 15 laps.

At the second start, Fernandez once again assumed the lead, establishing an early half-second gap over Baldassarri, who had moved up to second.

As the pair pulled away from the rest of the pack, Baldassarri reeled in his teammate, ultimately completing a move for the lead down the inside of the hairpin-like Turn 13 just before the halfway point.

Yet Fernandez managed to remain right in the championship leader's wheeltracks, staying firmly in Baldassarri's tow over the next few laps.

With four laps to go, a twitch going through Turn 1 dropped Fernandez half a second back from Baldassarri, while allowing the chasing Speed Up rider Navarro – who had passed Luthi for third and was edging ever closer to the Pons duo – to get himself within striking distance.

Navarro picked off Fernandez for second into the recently-renamed Pedrosa corner on the penultimate lap, but ran out of time to catch Baldassarri, finishing 0.359s behind.

Fernandez celebrated his maiden grand prix podium in third place, ahead of Luthi and the leading KTM of Brad Binder.

Xavi Vierge recorded his best finish of the season yet in sixth, while Tetsuta Nagashima was a career-best seventh, having initially started the race from the pitlane due to mechanical issues, only to have his hopes of a good result salvaged by the red flag.

Behind eighth-placed Luca Marini, Nicolo Bulega secured his first Moto2 points in ninth, while Iker Lecuona made it two KTMs in the top 10.

Marcel Schrotter, who had been Baldassarri's closest rival coming into the race, picked up the final available point in 15th.

Ex-Aprilia MotoGP rider Sam Lowes crashed out while running in the top 10, while the likes of Simone Corsi, Mattia Pasini and reigning Moto3 champion Jorge Martin joined him on the sidelines.

Marquez took the second start from the pitlane thanks to a heroic effort from his Marc VDS team to rebuild his damaged bike during the red flag – but the Spaniard could only recover to 24th in the end.