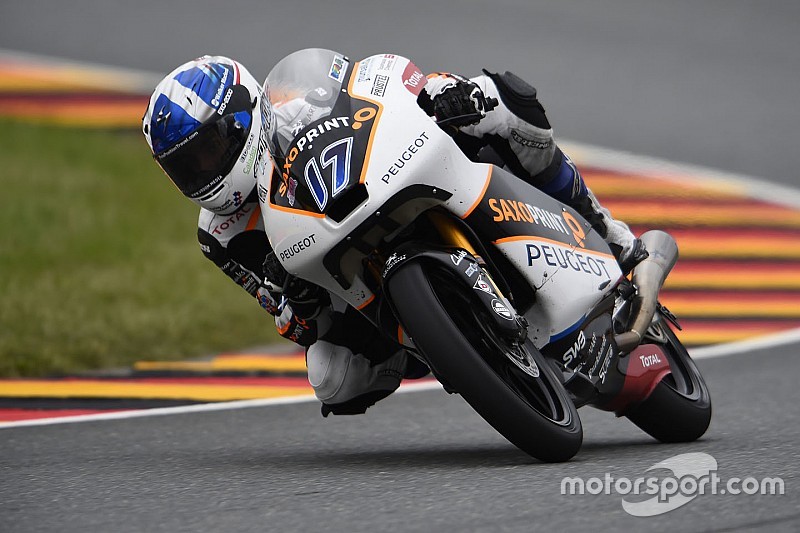 The Racing Steps Foundation rider lapped in a 1m27.739s on his Peugeot Mahindra, finishing 0.610s off polesitter Enea Bastianini.

"It’s nice to be up amongst the front three rows where we know we should be," he said after the session. "It’s been a tricky start to the season.

"But it’s very good to see the light at the end of the tunnel and we’re moving in the right direction.

"Big thanks to Mahindra for bringing along the new gearbox which has improved our performance. Hopefully we can return the favour with a good result in the race," the British rider added.

McPhee was one of the first rider to use the Indian manufacturer's upgraded gearbox as a guest rider in the junior Moto3 championship two weeks back.

The 22-year-old has been on song this weekend with 10th (FP1) and 13th (FP2 & FP3) place finishes during the three practice, qualifying as the highest Mahindra-powered rider in Saturday.

"Lap time wise we’ve had a lot of potential in the last few races, unfortunately we’ve been too far back to really be able to do anything with it.

"Hopefully with a good start we can fight with the front runners," he added sounding optimistic about his chances.

The factory Aspar team's Jorge Martin was the next best at 10th ahead of teammate Francesco Bagnaia, both separated by just 0.064s and within a second of Bastianini's time.

Returning from injury, Martin, suffered his second fall of the weekend at Turn 6 in qualifying but managed to get back after the session was elongated due to red flag stoppage.

"It has been a positive day in some aspects but negative because of the crash, which made the rest of qualifying difficult," Martin said.

"Despite that we have managed our best grid position of the season, although I didn't feel as comfortable when I went back out.

"I am confident in my pace and I am looking forward to a good race. I guess it will be a group race, it is unlikely anybody will escape although not impossible."

Platinum Bay's Danny Webb's mechanical trouble meant his Mahindra spilled oil at Turn 4, 5 and 6 before he crashed out at Turn 7.

The session was red flagged to clear the spill while the British rider was taken to the medical center for precautionary tests.

Teammate Darryn Binder qualified 31st and is expected to start from 30th after Team Italia's Stefano Valtulini was penalised from 27th to 31st.

Ahead of them are CIP's Tatsuki Suzuki at 23rd and Peugeot's Alexis Masbou just behind on 24th while Team Italia's Lorenzo Petrarca is 32nd and CIP's Fabio Spiranelli 34th.

Aspar Mahindra bank on new gearbox to deliver at Sachsenring