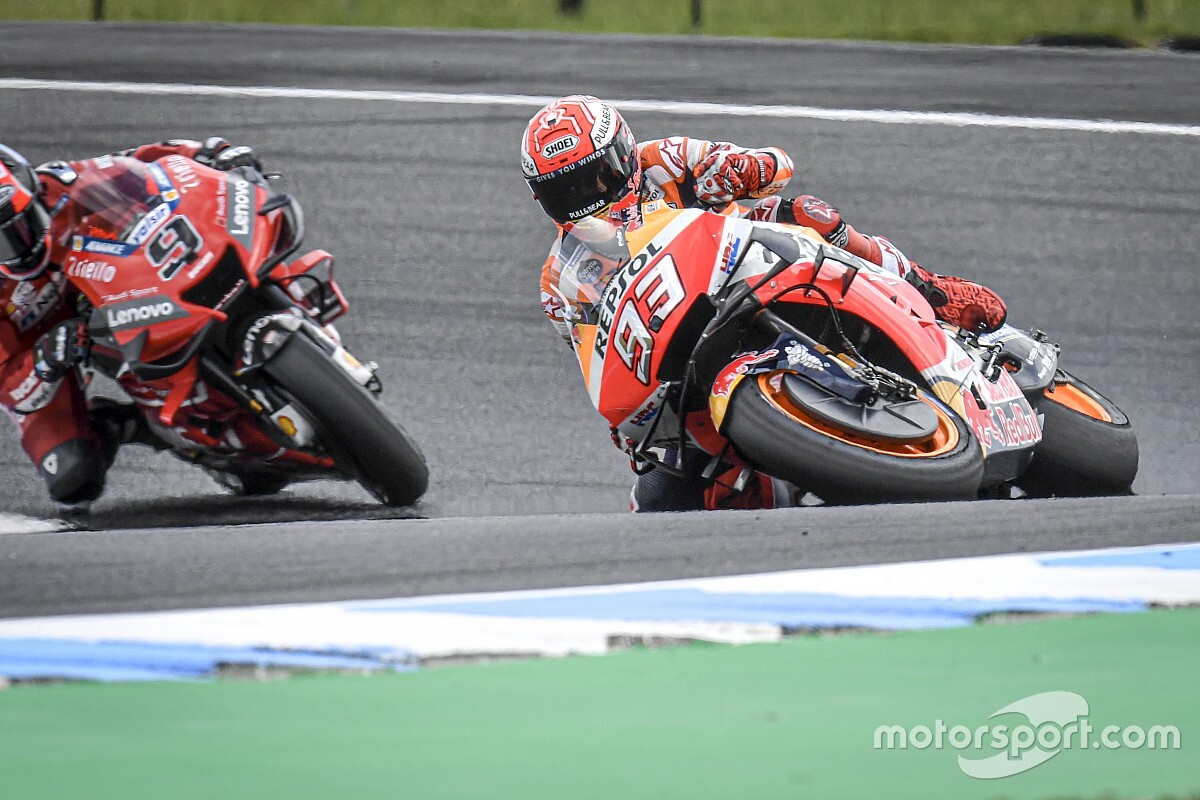 Marc Marquez says he was close to 'giving up' and crashing before he managed to pull off his latest heroic save during MotoGP's post-FP2 tyre test at Phillip Island.

The riders carried out a 20-minute test session following second practice on Friday at Phillip Island to try out a new tyre construction from Michelin ahead of it being raced next season.

Honda rider Marquez topped the session, though very nearly ended it with a crash at the Turn 10 hairpin of MG corner when he tucked the front-end under braking.

Despite registering a lean angle of 70.8 degrees, Marquez managed to right the bike by opening the throttle – something he admits almost never did as he was “thinking to give up” on saving the incident at that moment.

“We were on a long run, I was riding very smooth, I was with the soft compound in the right [side of the] tyre because I choose earlier and for that long run it was too soft,” Marquez explained.

“But then I lose the front. I was banked a lot, but it was one part of the incident that I was thinking to just give up.

“I was thinking to give up, but then I say ‘before giving up, open gas, see what happens’.

“When I opened the gas, it’s when I had that kind of reaction from the bike that was kind of like a wheelie and I was able to save it.”

Marquez joked his younger brother Alex’s sensational save during a wet Japanese GP Moto2 practice “motivated him” to do a better one.

Marquez: No problem with Lorenzo after FP2 touch

In the closing stages of FP2, Marquez came across his teammate Jorge Lorenzo touring on the racing line while the world champion was on a flying lap.

The pair made slight contact as Marquez passed around the outside of the Turn 11 left-hander, breaking part of the wing on Lorenzo’s bike, and prompting Marquez to vent his frustration towards him on the cooldown lap.

Marquez says tensions have now been diffused after the pair met to discuss what happened, but urged riders not to ride “in a slow mode” on the racing line.

“In the first moments I was upset because we cannot forget that FP means QP – you need to go directly to QP2,” he said.

“The forecast tomorrow looks like it will rain. [That lap] was my last chance, I was on a very fast lap, I tried to overtake him the best way for me to not lose time.

“But in the end we need to pay attention because we cannot ride in a slow mode in the middle of the [racing] line.

“Of course, he did not have more space [to use], but you need to check behind and be out of the line.

“Apart from this, I was angry in the moment, but then we spoke together, no problems.”

Zarco "was like a rookie" on first day with Honda