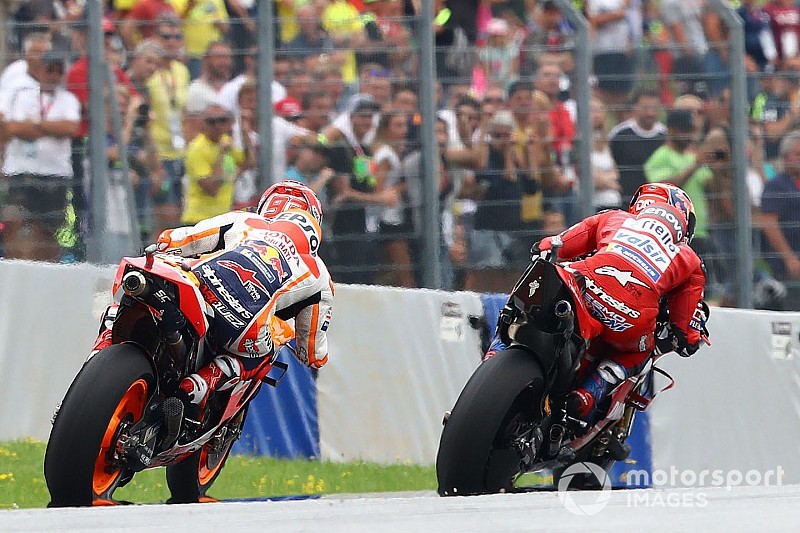 MotoGP championship leader Marc Marquez says he was briefly expecting to crash at the final corner of the Austrian Grand Prix, after getting his right brake lever guard caught on Andrea Dovizioso’s bike.

Dovizioso had lunged down the inside of Marquez at the final corner, and the Honda man looked to cut across Dovizioso’s line to get a better exit onto the start-finish straight – which would’ve emulated the Italian’s race-winning manoeuvre at the same corner two years prior.

However, minor contact between the two bikes on this occasion led to Marquez being momentarily dragged wide to the outside along with Dovizioso, which allowed the Ducati rider to preserve his advantage and go on to win by two tenths.

Marquez said he had anticipated Dovizioso’s Turn 10 lunge, but chose not to take an overly defensive line into the downhill right-hander so as not to lose out on the run to the chequered flag.

“I say ‘if I go in the last corner too fast, he will overtake me before the finish line’ because I didn’t have the drive, I needed to keep the corner speed and then I tried to choose the middle [line]," Marquez explained.

“When he overtook me, I was thinking that I was able to stop the bike and come back, like he did two years ago - but then my protection of the front lever was touched [caught] on his leather or some part of his bike.

“And then I was going wide with him, because my bike was going with his bike. I was thinking that I will crash, but then fortunately that piece broke, and then I was able to stop the bike and I didn't crash.

“But, yeah, was that small contact, that piece, the protection of the front brake, was attached to somewhere of his bike.”

Marquez made it clear he had no issues with the Italian’s overtake or the minor collision, calling it “part of racing and something that I like”.

The championship leader, who rued a “mistake” in choosing the medium-compound rear tyre, said he had noticed Dovizioso release the throttle on the straight so as not to overtake him at points during the race.

“Dovi did a great race,” Marquez said. “I already check; the last six-seven laps he was playing with me. He closed gas on the straight sometimes.

“For that reason I started the last lap in front, to try to defend, because I was not able to attack. But even like this I had a small chance to win the race.

“I tried, it was not possible and the most important is that we struggle but we finish together with Dovi in the final lap. So that’s more important for the championship.”

Asked whether he was indeed “playing” with Marquez, Dovizioso said: “I played not with [overall] speed, because if I had chance to finish alone, I would.