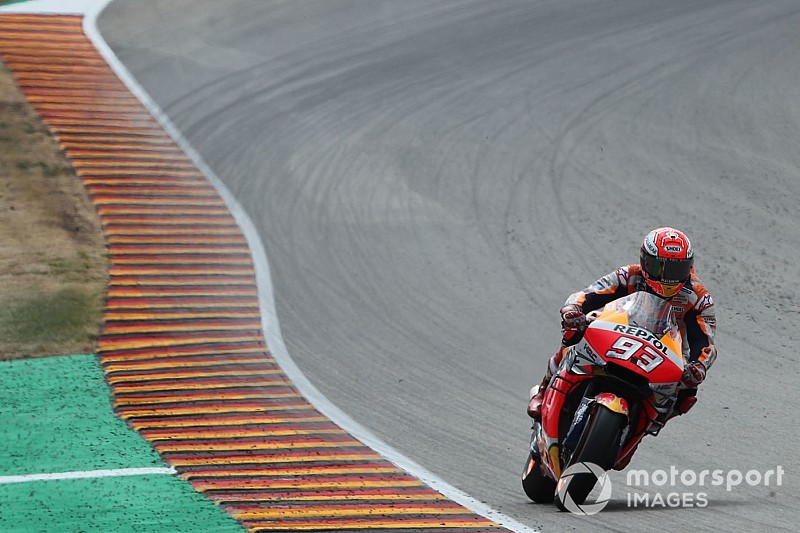 Honda rider Marc Marquez topped the third MotoGP practice session at the Sachsenring, while Valentino Rossi and Andrea Dovizioso will have to take part in Q1.

Marquez's nearest rival Fabio Quartararo had a massive moment at the end of the session when his Yamaha shook violently at Turn 11. While he didn't crash, he was left in obvious pain in his left shoulder.

The Frenchman, along with other Yamaha riders, also struggled with the first corner of the circuit early on.

Quartararo went off twice, and works rider Maverick Vinales then came close to hitting the wall on two occasions. Quartararo's teammate Franco Morbidelli also had a trip through the gravel at the corner.

At the start, Aprilia's Aleix Espargaro impressively came within four tenths of Marquez's Friday benchmark, and led the majority of FP3, with the Honda rider sitting second.

Quartararo then put on a new soft rear tyre and took the lead, setting the best time of the weekend with a 1m20.515s, which he recorded while running behind Marquez.

Vinales progressively closed the gap to Quartararo, in the end ending up just one tenth behind the rookie.

However, both Yamaha riders were beaten by Marquez in the end, the Honda rider doing a 1m20.347s on his second flyer after he had made a mistake on his first.

Quartararo ended up second from Vinales and Cal Crutchlow, who was fourth-fastest with a fractured right knee. Suzuki's Alex Rins was fifth, with Morbidelli taking sixth.

Danilo Petrucci and Jack Miller were the top Ducatis in seventh and eighth respectively, with ninth-placed Joan Mir making it two Suzukis in the top 10.

KTM rider Pol Espargaro also made it to Q2 in 10th, but ended the session with a crash at Turn 3.

Espargaro beat Valentino Rossi by 0.013s, the Yamaha man once again confined to Q1 - where he will be joined by Ducati's Andrea Dovizioso, who was only 14th.

Pramac Ducati rookie Francesco Bagnaia returned to riding after missing FP2 following his hospital visit in the aftermath of his FP1 crash. He was last in the Saturday morning session.

Sachsenring MotoGP qualifying as it happened