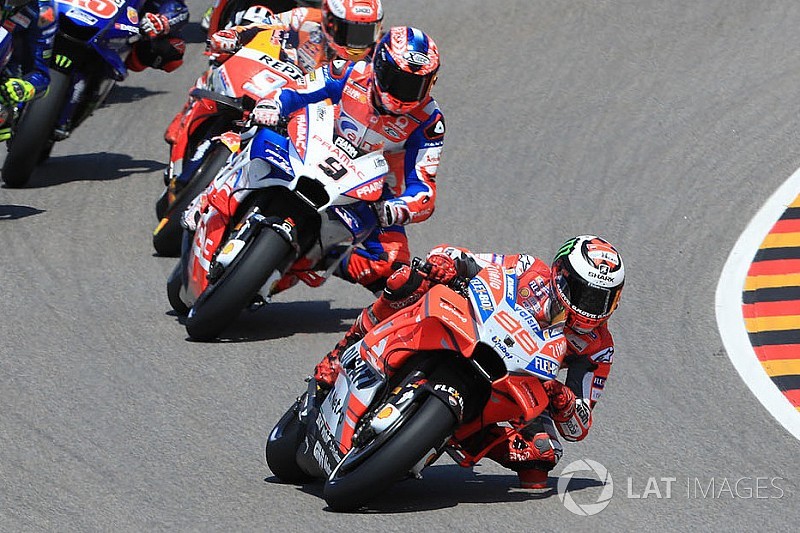 Pramac Ducati rider Petrucci was beaten to third place behind Marc Marquez and Valentino Rossi on the penultimate lap at the Sachsenring by Maverick Vinales, having dropped time trying to pass the fading Lorenzo's works GP18.

The two came to blows at the Turn 1 right-hander, where Lorenzo had adopted a wide line and chopped across Petrucci’s bows.

Petrucci said this cost him one second to the pursuing Vinales – and while he wasn’t certain the Yamaha rider wouldn't have passed him anyway, he suggested the Lorenzo run-in could have been the difference between finishing third and fourth.

Petrucci recalled: “He [Lorenzo] went wide at Turn 1, I was on the inside, quite calm. But then he saw me, and I think he decided to touch me, because he touched me on my front tyre.

“I think he saw me and did, I think, not voluntarily but for sure he didn’t try to avoid me. And we lost one second, exactly one second compared to the laps before.

“Maybe with that second I could finish on the podium, but for sure Maverick was faster because he had more tyre [life] and he passed me where I could not answer him.

“For sure [Lorenzo] was not so clever to do that line in Turn 1, because I saw even with Rossi, he was catching him from the outside, and I don't know what is his thought about that line.”

When asked about the incident by Motorsport.com, Lorenzo said it was up to Petrucci to realise that he would inevitably cut back to the inside having gone wide.

“[The rider] who is in front, has no view [of the one behind], and if you go wide on the dirt, you try to go on the clean line as soon as possible,” said the Spaniard.

“The rider behind must know that the rider in front going to come [to the inside] sooner or later. He needs to be careful.

“He [Petrucci] said, ‘this is my opportunity, I go, I open more the throttle’. That was the problem. He needs to understand, ‘I will have another opportunity because I am faster than him. I will overtake him in another corner.’

“That was the problem, in my opinion, because I can’t stay on the dirty line forever.”