Petrucci will now "do everything" to aid Dovizioso title bid 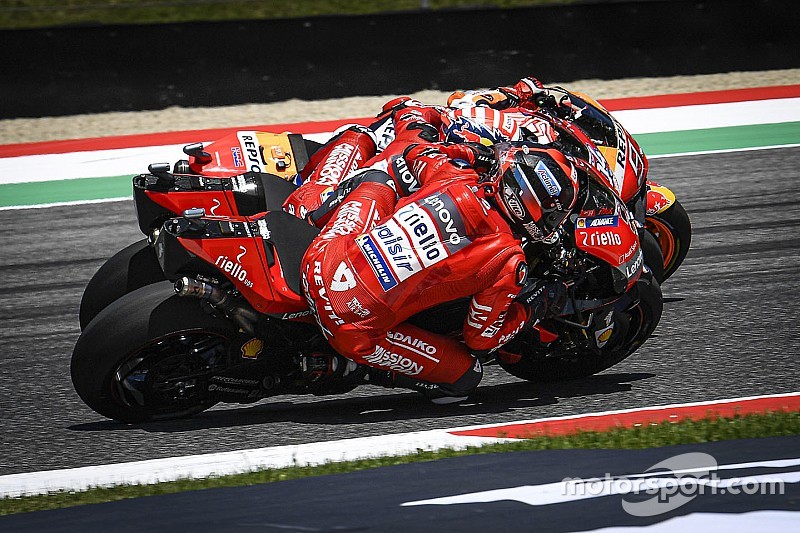 Petrucci beat Dovizioso and Honda's championship leader Marc Marquez in a three-way scrap to win the Italian Grand Prix at Mugello, pulling off a decisive last-lap move at Turn 1 to pass both of his rivals.

The overtaking attempt compromised Dovizioso, forcing him to drop behind Marquez and ultimately costing him points in the title battle, and Petrucci acknowledged after the race that he regretted to have hindered his teammate's championship campaign.

Now that he has accomplished what he feels was his primary target for the season, Petrucci said he is ready to fully commit to helping Dovizioso's title prospects.

“As we told you since the beginning of the season, we have two different targets,” Petrucci said of himself and his teammate.

“Mine was to win the first race, then we have to reach the target of Andrea. And I will try to do everything for let it be this target.

“I'm so sorry for sure that – I think both Marc and Andrea could win today, but you know, racing is always on the limit. And this time was my time. I think I had a big opportunity.

“Next time I think I will think about the championship. We are, I think, the best team in the MotoGP, the points are saying this, so we can work together to be the best at the end of the year.”

The Mugello result leaves Dovizioso 12 points behind Marquez in the standings, with fourth-placed Petrucci a further 21 down on his teammate.

Honda is six points up on Ducati in the constructors' championship, which only counts the points scored by the top rider - but the Italian outfit holds a considerable lead in the teams' standings.

Petrucci had held back when battling Dovizioso in the previous race at Le Mans, but said Ducati has given him no order to avoid fighting his teammate.

“At the beginning of the season, we have a meeting and they say I have to win, but for sure not to do strange thing with Andrea," he said.

“For my point of view, the space there was [at Turn 1], and I try my best, but also during the race I made many many pass like this.

"But this time there was no meeting, They just say to try to win the race.”

Rins: Mugello result disappointing as I had "rhythm to win"