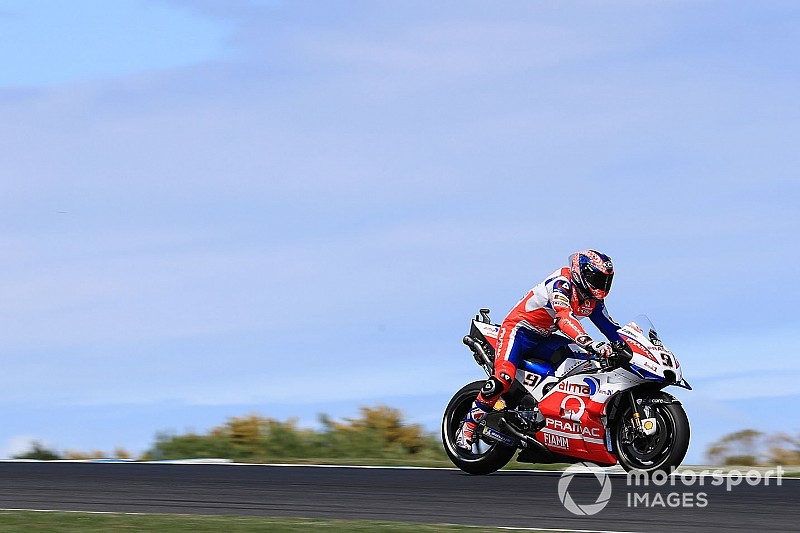 Danilo Petrucci says his Pramac Ducati team still cannot understand the reason for the clutch failure on his GP18 that caused him to run off-track right after he took the lead at Phillip Island.

Petrucci had a spectacular start to the Australian Grand Prix as he led into Turn 1 from eighth on the grid, only to then run off-track one corner later.

The Italian revealed the mistake was a result of "a small issue" with the clutch, which didn't work during the opening lap.

He added that issues on his bike persisted for the rest of the race as he had to ride without engine brake, but that the Pramac team wasn't able to offer an explanation for the cause of the problems.

"It was a problem they [the team] don't understand, why the clutch remains blocked after the start and then in the first lap," said Petrucci, who managed to recover to finish 12th after dropping to the rear of the field.

"For sure was a missed opportunity because after my best career start from eighth to first, I think I have my first holeshot in MotoGP, I had a small issue in the second corner with the clutch.

"Then I was able at least to stay up to recover my bike. I had no clutch for the first lap and I had the chance to think [if] I stop or not.

"Then don't know what happened after the second lap because became the clutch all closer, I mean I have no clutch under braking, goes fully open.

"This means that every gearshift I felt the clutch was sliding. I have no torque on braking so I have no engine brake for all the race.

"In Phillip Island is not a big problem because don't have a lot of heavy braking area. In Misano for example I had a similar problem and the race was a disaster, but in Phillip Island was good."

Petrucci added that he can't be upset with the bike as there have been times he was the one making mistakes.

He said: "For sure 12th position is nothing to be happy about but anyway in Japan I made a mistake in qualifying and in practice and making a gamble with the setup.

"I can't be upset with the bike. Sometimes I make mistakes, a few times the bike has some problems.

"It's very heavy to lose some points, but I said, 'okay, I am riding a MotoGP [bike] in Phillip Island, I will try to do my best and see if the bike is going to be broken definitely or stay together'.

"I said, 'okay, I can have 45 minutes free running because I don't have to care about [saving] the tyre or fuel'. I said, 'I will try to score at least some points'.

"On the second lap I was 20 seconds behind the last guy and I simply enjoy riding the bike in one of the most wonderful tracks in the calendar, and at least it works because I showed good pace."