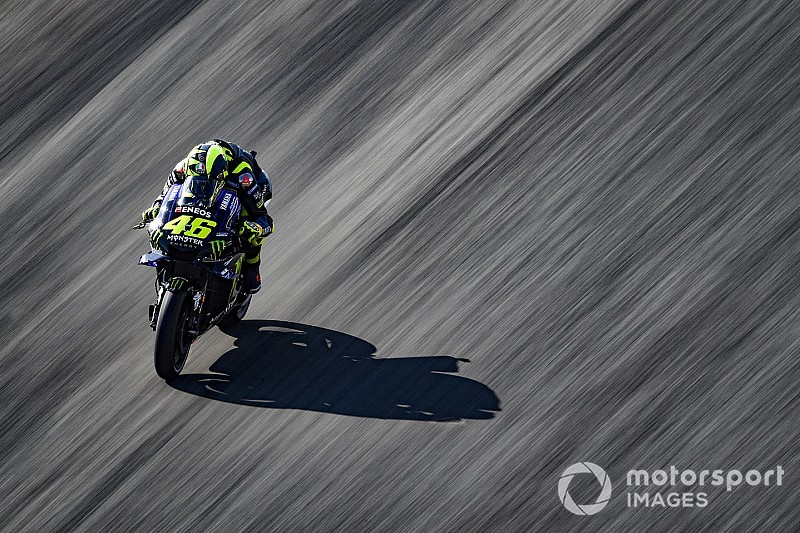 MotoGP star Valentino Rossi says Yamaha is "in trouble" following a Friday at Jerez during which the Italian was only 16th-fastest overall.

Rossi ended up 18th and 14th respectively in the two Friday practice sessions, and was nearly eight tenths slower than pacesetter Danilo Petrucci.

Jerez has been a difficult circuit for Yamaha in recent years, but Rossi says that there were hopes the 2019-spec M1 and the resurfaced asphalt would lead to better form this time around.

But Rossi admitted that he was "not fast", did not have a strong pace and that his problems were a general poor feeling with the bike, rather than a specific issue.

"Was a difficult day," said Rossi. "We know that here in Jerez we suffer a bit, because in the last years we are not very fast.

"We hoped also that we can be better than last year because of the modified bike [for 2019] that help us in the first three races.

"Also have the new asphalt, so we hoped that we can be more competitive but the day was difficult.

"We try some different things in the afternoon but I was not fast, also my pace is not fantastic, I am quite low in the ranking, we are a bit in trouble.

"We are not strong. Looks like that marriage between the M1, tyres and the track is not fantastic.

"I don't have a particular problem but in general. We try to modify the balance of the bike because I suffer in general, also in the entry for example I am not fantastic.

"Is not just in acceleration. We try to modify something but unfortunately doesn't work."

Rossi's teammate Maverick Vinales ended Friday in fifth but was similarly displeased with the bike.

"The problem has been the same for two years, it's the same in every race. I have to brake very carefully and before," he said.

"The engine brake doesn't behave properly. Jerez is one of the worst tracks for us.

"In electronics we suffer a lot. We have to keep working and find a way to make it work. It's very important for me to make the bike work with my style."

When asked if a poor performance at Jerez could mean another season of constant struggles, Rossi said: "For sure if we are able to be strong here, is very positive but if we struggle here, is negative [only] for this weekend.

"For me is not the final answer. Maybe we struggle in Jerez, and we go Le Mans and the bike is well. It is not finished everything here.

"To continue to fight in the championship we need to take some points anyway."

Lorenzo hoped to be more competitive at Jerez