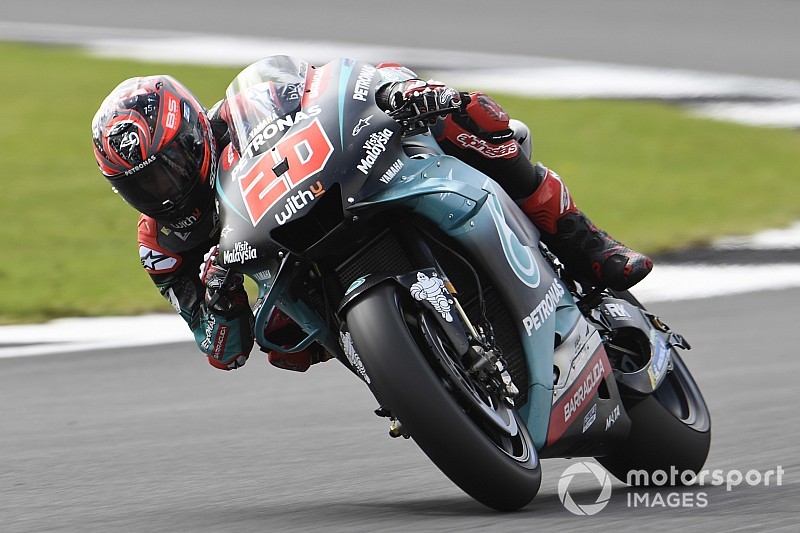 Following the cancellation of last year’s British GP, Silverstone underwent a complete resurfacing ahead of the 2019 event, with Honda’s Marc Marquez setting pace on the new asphalt in the early stages.

The Honda rider established an early benchmark of 2m03.666s, which he soon improved to a 2m01.360s to go four tenths clear of the field.

Marquez continued to lower the benchmark, moving seven tenths clear of the rest with an effort of 2m01.037s after 15 minutes.

This time would be steadily chipped away at by both Quartararo and Vinales, with the latter getting to within 0.126s midway through before suffered a fast crash at Stowe corner.

He was unscathed and returned to the action in the latter stages to end up third-fastest, though some 0.740s behind Quartararo.

Marquez once again eked out a margin of four tenths with a 2m00.645s moments after Vinales’s crash, and was finally usurped by Quartararo, who came close to the outright lap record with a 1m59.952s with three minutes remaining.

The Petronas SRT rider came under no threat through to the chequered flag, with Marquez only marginally improving to end the session 0.586s adrift.

Suzuki’s Alex Rins leapt up to fourth after a steady start to the session, edging the Petronas bike of Franco Morbidelli and 2017 Silverstone race winner Andrea Dovizioso (Ducati).

Next up was the second works Yamaha of Valentino Rossi in seventh, with home hero Cal Crutchlow (LCR Honda) heading Danilo Petrucci (Ducati) and Jack Miller (Pramac) in eighth spot.

Tito Rabat, who suffered a horror leg injury at Silverstone last year, was just 0.054s outside of the top 10 in 11th, leading Aprilia duo Aleix Espargaro and Andrea Iannone.

Johann Zarco, who recently announced a shock departure from KTM at the end of the season, was best of the KTM runners in 15th ahead of Tech 3’s Miguel Oliveira, who suffered a technical issue at the start of the session.

Honda’s Lorenzo brought up the rear of the field on his first MotoGP outing since breaking his back in a crash during FP1 at Assen. He ended up 4.4s down, having completed 16 laps.

Karel Abraham was the only other faller in the session, the Avintia rider also crashing at Stowe.