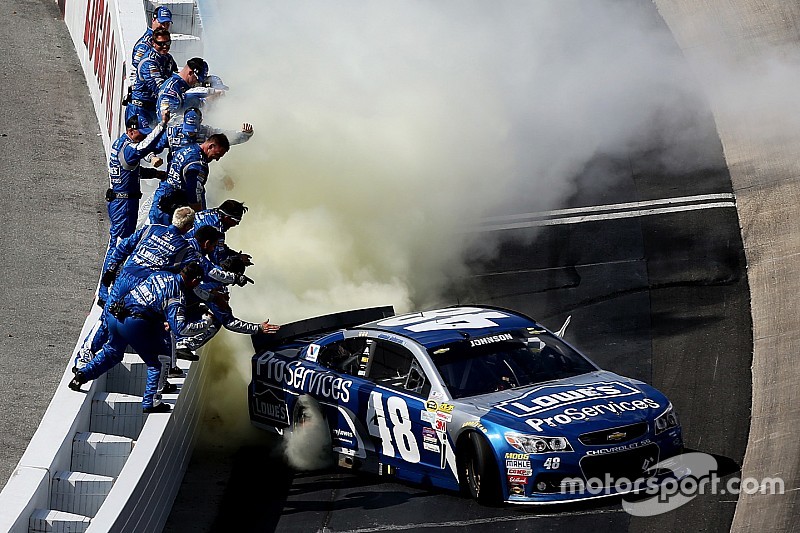 Only five drivers in the history of NASCAR have won at least ten races at a single track.

"There's some weird pressure that comes with it," Johnson says of his Dover dominance.

Kevin Harvick finished second, Kyle Larson was third, Kasey Kahne was fourth after starting the race 25th, and Aric Almirola fifth after the race went to overtime with a green-white-checker attempt.

"We had a good day," said Kahne. "Started 25th and drove toward the front the entire race."

Denny Hamlin and Martin Truex Jr. dominated for the first half of the race. The race went green for the first 75 laps before debris was spotted on the circuit.

With just under 100 laps to go, control of the race moved over in favor of Kevin Harvick, who spent the closing laps trying to fend off Jimmie Johnson. At lap 375, the caution came out once again when third place Kyle Busch collided with Brian Scott, who he was trying to lap.

Johnson took the lead from Harvick on the ensuing restart. The yellow flag waved a few laps later when Denny Hamlin spun off the nose of Clint Bowyer, taking out Kurt Busch. Kahne pushed Johnson out in front of Harvick on that restart and moved into second, but was unable to run down his teammate.

"His (Harvick's) car didn't look as strong as it did earlier in the day, and we were just able to take advantage of it," Johnson said.

"We were just terrible on restarts. The track bar broke," Harvick said. "The track didn't change much. We were just in a box with our track bar."

The final caution came with just two laps to go when Casey Mears and A.J. Allmendinger spun, resulting in a GWC with Hendrick Motorsports teammates Johnson and Kahne on the front row. Harvick got up to second on the scramble to the finish and Kyle Larson took third. Kahne and Aric Almirola rounded out the top five.

Truex gets heated at his hometown track