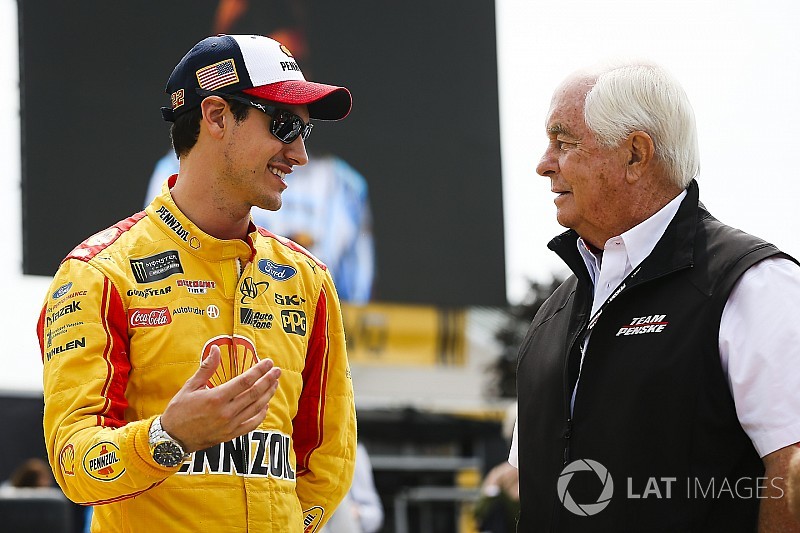 With 10 races remaining in the Monster Energy NASCAR Cup Series regular season, Team Penske is looking to put all three of its cars in the championship-determining, 10-race playoff.

That would be a first for the organization and a first for owner Roger Penske, whose history in the series dates back to 1972.

Given that only six drivers have won at least one race this year, the 16-team playoff field will likely be filled with drivers who qualify based on their points positions in addition to those who have made it to victory lane.

Which is good news at the moment for many harboring hopes of a playoff spot.

The Penske trio have combined for 12 top-five and 29 top-10 finishes through this season’s 16 points races. But only a single win.

“I think we’ve been competitive,” Penske said Wednesday. “Blaney has had some good runs, Brad and Joey (as well.)

“We’ve been the best cars, I think, on the superspeedways. Not bad (elsewhere). The way I look at it, we’ve got the same vehicles that Stewart-Haas Racing has; they’ve been able to execute.”

Team Penske is one of six organizations that field Ford entries in Cup and has been with the automaker since 2013.

SHR, which fields four teams with drivers Aric Almirola, Clint Bowyer, Kurt Busch and Kevin Harvick, made the move from Chevrolet to Ford in 2017. Since then, its drivers have won 10 times, including seven this season.

Blaney has a top finish of third at Martinsville this year, where he led 145 laps; he also led 100 at Bristol (Tenn.).

Keselowski, the 2012 series champ, finished second at Atlanta and was out front at Dover for 108 laps.

Logano picked up the win at Talladega Superspeedway and has rarely finished outside the top 10 this season.

But the victories have been practically non-existent.

“I’m never relaxed - I think that we’ve got some more work to do but my goal is to get them in the playoffs,” Penske, 81, said. “I know our cars are getting better; we’ll see what happens this week in Chicago because we’re bringing better stuff every week.

“Whether we’re behind Stewart-Haas, I don’t know that. Obviously when you look at the numbers they’ve done a great job and that’s also good for Ford. Much better than people might have bet on.”

Blaney has only two starts in Cup at the 1.5-mile track but finished fourth in his 2016 debut while Logano has finished inside the top 10 in five of his last six starts at Chicagoland. Included in that run was a second-place result in ’16.

Keselowski is a two-time winner there (2012, ’14) and has an impressive run of seven consecutive finishes of seventh or better.

• Penske said there while “everything could be better” with regard to the overall health of NASCAR, it’s also time of transition for the sport.

His view, he said, is that “the glass is half full, not half empty.”

“ They’re discussing the rules and different aero packages; the cost concerns are always there for all the owners,” Penske said. “I think that as the team owners, the ones that have the charters, they’re locked in step from the standpoint of the way we discuss and operate with NASCAR. I think (NASCAR) has done a good job reaching out to us in a way that we can operate as professionals. … The car owners and NASCAR continue to look at what we have to do to be better. …

“I would say this, from a sponsor standpoint we have had more interest lately than we have had in a number of years. Now it’s not on a big $20 million sponsors but there are a lot of people who see it still as a way for customer entertainment, a way to do the business to business that we would do and I think that’s been quite effective.”

• This will be the first time the series has run at Chicagoland in July since 2010. The track hosted the second race of the playoffs each September from 2011-17.

NASCAR Roundtable: Will Truex win a third in a row at Chicagoland?