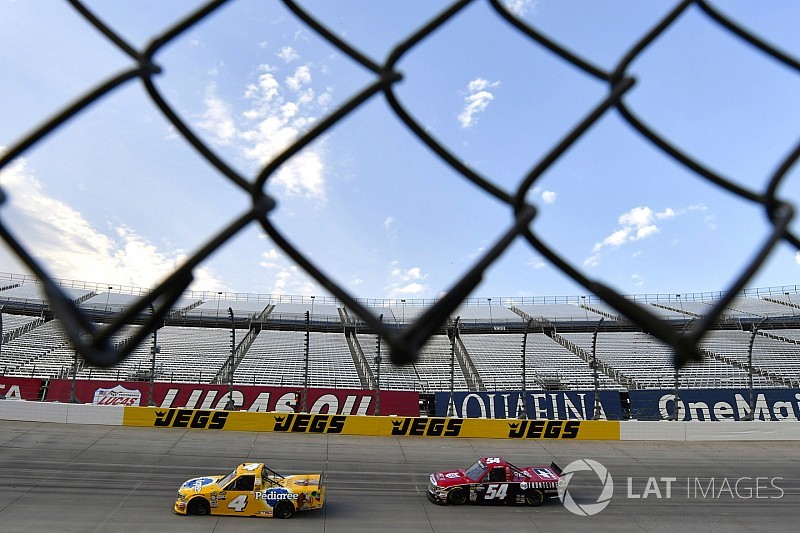 The first round of the latest father vs. son battle in NASCAR is over and it went down to the wire.

NASCAR veteran David Gilliland, entered in a truck he co-owns, bested his son, Todd, a rising star in the Camping World Truck Series, in the duo’s first-ever head-to-head battle in NASCAR competition.

Both were entered in Friday’s JEGS 200 at Dover (Del.) International Speedway with Todd, 17, driving a Kyle Busch Motorsports entry.

The two ended up racing for position a few times in the race, but Todd experienced an alternator issue late in the race that allowed his father to gain better track position. David Gilliland ended up finishing fourth while Todd rallied from his battery problem to finish 10th.

“Racing with Todd was a dream come true, so really wanted to accomplish two objectives – that was to race with Todd and have fun,” David Gilliland said. “I got to race him a little bit under green – that was fun.

“I wasn’t sure if we were going to after practice – his truck was pretty fast, but we had a good truck, really good. We passed a lot of cars – probably passed the most cars or trucks I’d say.

“We had pit problems every stop and lost multiple, multiple positions, but that’s what we’re here to do is evaluate our team and see where it’s at and keep it growing.”

Todd is running a majority of the Truck schedule with KBM this season and is a member of NASCAR Next, an industry-wide initiative which identifies rising talent in racing. Todd will run the remainder of the Truck season once he turns 18 later this month.

David Gilliland has made more than 300 starts in the Monster Energy NASCAR Cup Series, more than 50 in Xfinity (with one victory) and a dozen in Trucks. He’s also a veteran of the K&N Pro Series West and Southwest series, where he won a combined 13 races.

Todd was fast on the track throughout Friday’s race but a pit road speeding penalty and the battery issue proved too much to overcome for his first series victory and left him chasing his father as the race wound down.

“We definitely had a really fast Toyota. That’s what it’s all about – bringing fast trucks to the race track every week,” he said. “We’ve been doing that and that’s what makes these issues even more frustrating.

“Once we get some luck on our side and can put the whole race together we’ll be good. Anytime you can come away with a top 10 is good.”

Before the event, Todd said he and his dad definitely were hoping to “beat each other.”

“But you also just kind of focus on the real race out there. He’s always been a good guy to lean on for me,” Todd said of his dad. “With his experience first-hand at the race track, the same track that I’m dealing with right now, it’s going to be I think a little bit of an advantage.

“It’s always going to be tough racing with him.”

NASCAR's Camping World Truck Series to get new name in 2019