The NASCAR Camping World Truck Series will bring their tail gate style of racing to the Chicagoland Speedway on Saturday, July 21st, for the running of the American Ethanol 225.

Race number ten of the season will bring an interesting storyline to the series' championship points and owner's points standings. That connection is the number 14. There are 14 points separating the top three drivers in the championship run. The top three in the team owner's standings are also separated by 14 points. The same three trucks are participants in both points series.

Timothy Peters, on the strength of his win last weekend in Iowa, is the points leader with Justin Lofton and Ty Dillon behind him in second and third. Those drivers are representing team owners Tom DeLoach, Eddie Sharp and Richard Childress who are ranked one through three in the owner's standings. 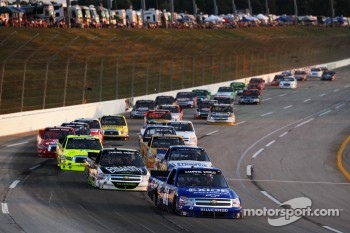 The American Ethanol 225 will also feature major milestones in the careers of two series champions and fan favorite drivers. Four time series champion Ron Hornaday Jr will be making his 310th start on Saturday which places him in third on the series' all time start list. Also, Hornaday needs to run only 73 laps in Saturday's race to reach the 50,000 laps milestone. That feat translates to 52,300 miles in a series truck since 1995. That's more than twice the distance around the world.

The presence of two time series champion Todd Bodine in Saturday's race will give him the distinction of making at least 200 starts each in all three of NASCAR's national touring series. Bodine will log 762 official NASCAR starts at Chicagoland which breaks down to 241 starts in the Sprint Cup Series, 321 Nationwide Series starts and now 200 starts in the NASCAR Camping World Truck Series.

Saturday's American Ethanol 225 is 150 laps/225 miles around the Chicagoland Speedway.

The race has 34 entries. With 36 starting berths available the element of go or go home, knock out qualifying, will not apply for this event meaning all entries will get to race.

The series is enjoying a highly competitive season in 2012 that has sent eight different winners to victory lane in the first nine races. However there will not be a repeat race winner on Saturday. Last year's winner and series' champion Austin Dillon has moved on to the NASCAR Nationwide Series.

The series has been surprisingly low on non eligible points drivers, or those occasionally visiting the series' events. There has been only two significant visits, from Kevin Harvick and Kasey Kahne, that were turned into race wins. Drivers Brendan Gaughan and Mike Harmon are the only two visitors in the starting field for the Chicago race.

The Chicagoland Speedway is a 1.5 mile, D shaped, tri oval. There are 18 degrees of banking in the four turns, 11 degrees in the tri oval while the straights are banked at five degrees.

The American Ethanol 225 will be broadcast live on the SPEED Channel beginning at 730 pm eastern time.

Jason White seeking another up front run at Chicagoland