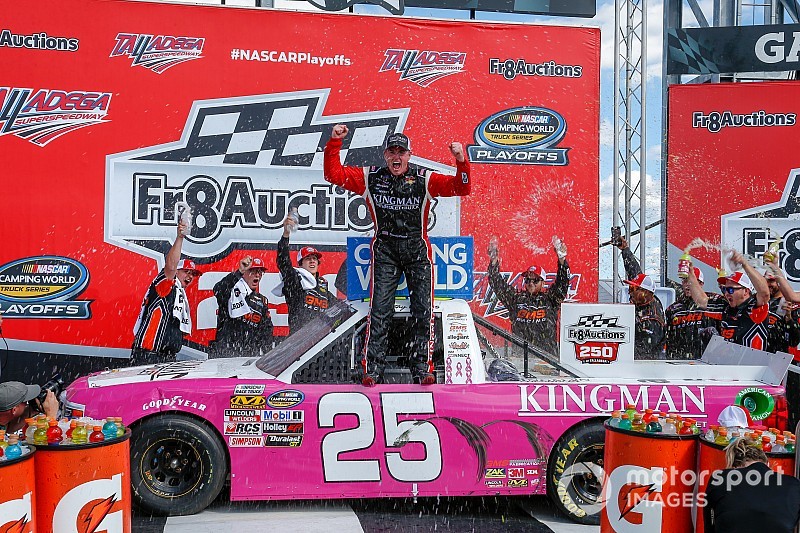 Timothy Peters got into race leader Noah Gragson on the last lap and went on to win Saturday’s Camping World Truck Series race at Talladega (Ala.) Superspeedway.

Gragson moved into the lead with three of 94 laps remaining but after Gragson took the white flag signifying the final lap, Peters got into the back of Gragson, which triggered a multi-truck wreck.

The win is Peters’ first this season in four starts and 11th of his career. It’s also his third win at Talladega.

"You kind of can't let up on that last lap. I hope everyone's OK," Peters said after the race. "I hate to cause that but I was going for the win, it's my last ride.

"I don't want to say, man. A lot of people have helped me get to this point. Man, God is good."

Advancing to second round of the series playoffs are Johnny Sauter, Haley, Gragson, Brett Moffitt, Matt Crafton and Grant Enfinger.

On Lap 60, Chris Fontaine spun at the front of the field after contact from Haley which triggered a multi-truck wreck that also collected Spencer Gallagher, Crafton, Sauter, Ben Rhodes, John Hunter Nemechek and Parker Kligerman, among others.

NASCAR immediately displayed a red flag to clear the track of debris.

“We had hands down the fastest truck in the field today,” Gallagher said. “A guy (Chris Fontaine) running up in a position that he probably doesn’t have the pace to keep gets turned and it cost us a great day. God, I’m mad about it right now.”

When the race returned to green on Lap 64, Jennifer Jo Cobb led the way. Todd Gilliland quickly made his way to the lead with a push from his father, David.

With 22 laps remaining, Enfinger grabbed the lead as Haley moved into second and Moffitt advanced to third.

On Lap 84, Todd Gilliland got alongside Enfinger and appeared to make some contact in the process. Enfinger came down and sent Gilliland’s No. 4 Toyota spinning and into the inside wall.

On the restart with six laps to go, Enfinger continued to lead the way. Shortly after the restart, David Gilliland got in the back of Enfinger and sent him for a spin as Haley moved into the lead.

With three to go, Gragson got around Haley and took over the lead.

Todd Gilliland held off Crafton to claim the Stage 2 victory.

Sauter was third, Rhodes was fourth and Nemechek completed the top-five.

Following the break between Stages 1 and 2, several drivers elected not pit and Hill took over the race lead on the restart on Lap 26 followed by Gallagher and Gragson.

During pit stops, Moffitt was penalized for an uncontrolled tire, David Gilliland for pitting outside the box and Robby Lyons for speeding on pit road.

Gallagher moved back into the lead shortly after the restart as Austin Hill dropped to second. Hill returned to the lead one lap later.

With 10 laps remaining in the second stage, Gallagher maintained a small lead over Hill, followed by Crafton.

Before the conclusion of the stage, Enfinger, Gallagher and Peters elected to pit. Gallagher received a penalty for an uncontrolled tire during his pit stop.

With two to go, Todd Gilliland moved into the lead as Crafton moved into second.

Enfinger, who is already locked in the next round of the playoffs, held off Sauter to take the Stage 1 victory.

Snider was third, Crafton was fourth and Gragson completed the top-five.

Gallagher got around David Gilliland, the pole-winner, on the first lap to quickly take the lead.

With 15 laps remaining in the first stage, Gallagher continued to hold a small lead over Enfinger, followed by David Gilliland.

On Lap 10, Enfinger worked his way to the front only to get hung out and see Sauter take the lead as the outside line powered by.

With five laps left in the first stage, Sauter held a small advantage over Snider, followed by Enfinger, Crafton and Nemechek.

Enfinger got a push back into the lead with four laps remaining as Sauter dropped to second.

Just before the conclusion of the stage, both Hill and Gallagher elected to pit.

Before the race, seven trucks had to move to the rear of the field – John Hunter Nemechek, Parker Kligerman, Hill, Stewart Friesen and Sauter for unapproved adjustments; Snider for an unapproved tire change; and Scott Lagasse Jr. for an engine change.