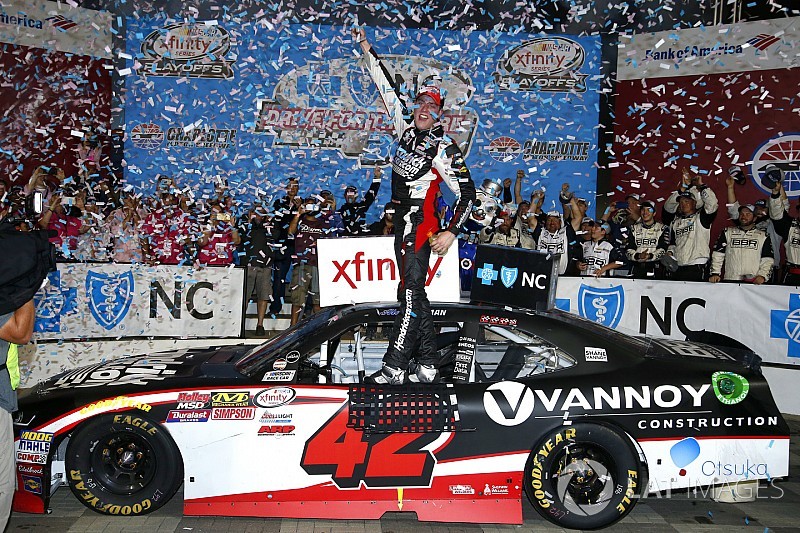 Alex Bowman, who will take over Hendrick’s No. 88 Monster Energy NASCAR Cup Series ride next season, earned his first NASCAR victory of any kind on Saturday night in the rain-delayed Drive for the Cure 300 at Charlotte Motor Speedway.

It was the first start in the NASCAR Xfinity Series for Bowman this season and came in Chip Ganassi Racing’s No. 42 Chevrolet – a deal that came together in coordination with HMS in just the last few weeks.

“This is just awesome,” Bowman said. “It means so much. To get my first win here in my second home in Charlotte means so much. Thank you to all the fans for sticking out this rain delay.

“It’s been a long time since I raced. I was terrible on pit stops and I didn’t do a good job on pit road but I felt my race car was really good. It was great to finally get us one.”

Bowman took the lead for the first and only time with 31 of 200 laps remaining.

On Lap 114, Allgaier, who entered the race as the series leader, had to take his JR Motorsports No. 7 Chevrolet to the garage after it appeared he lost his engine.

“We’re done, I’m sorry boys,” Allgaier said over his team radio. “I appreciate the hard work everybody. I’m sorry, I just wish I had seen the battery.”

Erik Jones was running sixth when he wrecked on the backstretch on Lap 121 to bring out a caution. Blaney was the first off pit road during pit stops and took over the race lead for the first time on Lap 127.

Fluid on the track in Turn 1 brought out a caution on Lap 161. During a round of pit stops, Daniel Suarez had a very long pit stop and ended up mired in the back of the pack on the restart. He was also penalized for an uncontrolled tire during the stop.

Byron remained on the track and led the way on the restart with 34 laps remaining in the race.

Suarez took command at the start of the second 45-lap segment and held off Jones to claim the Stage 2 victory.

Hornish charged his way through the field to the third position, Blaney was fourth and Bowman completed the top five. Hemric was the highest finishing playoff contender in the Stage, coming in sixth.

Following pit stops during the Stage break, Suarez once again was the first to come off pit road and continued to lead the way when Stage 3 went green on Lap 97.

Byron was caught speeding on pit road during the stops and had to restart the race from the rear of the field.

Spencer Gallagher hit the wall and then appeared to lose a right-front tire and brought out a caution on Lap 61.

During the break, Allgaier pit for to work on the front end damage he received from running over debris on the track with his No. 7 Chevrolet. Suarez continued to lead on the restart on Lap 67.

Jones was in the lead and claimed the Stage 1 victory when a caution forced the first 45-lap segment to end under caution.

Angela Ruch wrecked off Turn 2 on Lap 43 – the second time she was involved in an on-track incident in the first Stage.

On pit stops during the Stage break, Suarez came off pit road but Ty Dillon remained on the track and took over the lead on the restart.

Ruch spun out of Turn 4 on Lap 30 to bring out the race’s first caution. On the restart on Lap 35, Suarez led the way.

On the restart, both Sadler and Poole made contact with the wall but continued on with no caution.

“Not sure what the hell happened,” Elliott said over his team radio. “I thought I had a flat, but I don't.”

Brennan Poole and Ganassi to part ways after 2017 season