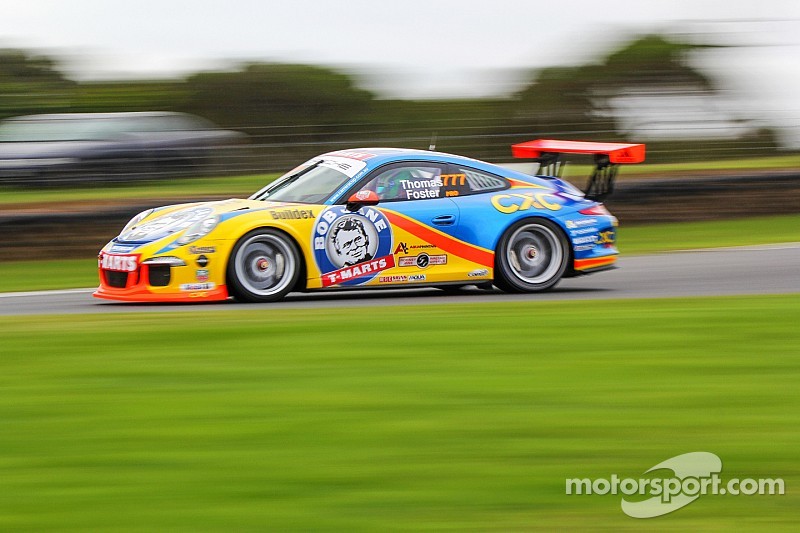 It was a Pro-Am in the truest sense, with the race coming down to a door-to-door battle between Formula Vee driver Dylan Thomas and V8 Supercars driver Nick Percat.

Thomas had found his way to the front after a solid first stint from Carrera Cup regular Nick Foster, with the car in second place following the stops. Thomas then passed fellow amateur Adrian Mastronadro for the lead several laps into the second stint.

But the real challenge was always going to come from further back, with the Nick Percat/Shane Smollen lurking just inside the Top 10. Smollen started the car from pole position, and kept things clean in the first stint despite losing positions to faster drivers such as Tim Slade, Nick Foster, Dean Fiore, and Christopher Mies.

He then handed the car over to Percat as soon as the pit window opened on Lap 17, in ninth position and 35s behind the leading Slade/Mastronadro entry.

Percat wasted no time making his way towards the front; within 12 laps he was running third, and had cut the lead down to seven seconds. And with two laps to go, he finally chased down leader Thomas.

However, Thomas held his ground, defending well to keep Percat behind him as the pair staged a thrilling last-lap battle.

“It’s been a rough start to the year,” said Foster.

“This round throws up a few interesting question marks. We got Dylan on board late, he’s only done half a day in the car! Today has been incredible. I’m stoked.”

Richard Muscat and Sam Walter finished third, with Mastronadro and Slade slipping to fourth at the finish.

The much-anticipated battle between Percat and Scott McLaughlin never had a chance to materialise, thanks to a mistake from car owner Stephen Grove on just the second lap of the race. Grove, starting second, got the jump and led the race for the first lap, but dropped to last on the second after spinning at turn four.