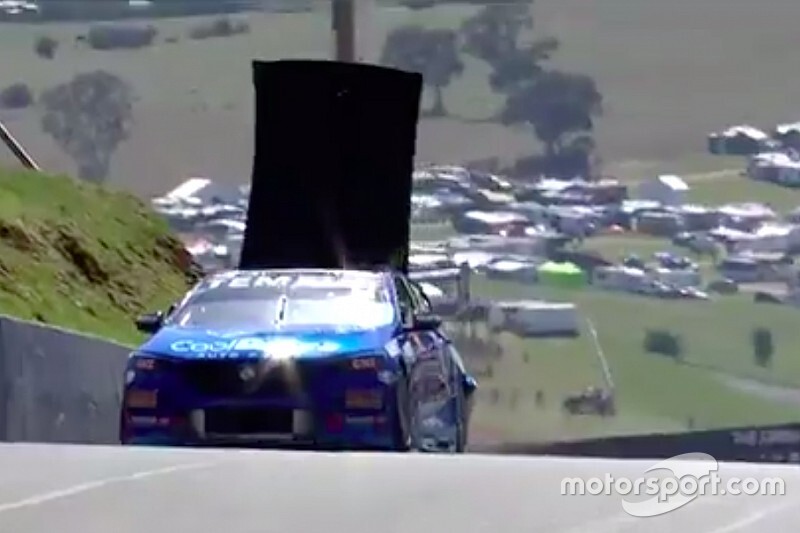 The Brad Jones Racing driver slapped the wall at The Cutting just over halfway through the hour-long session, claiming the unwanted honour of first crash, and red flag, of the weekend.

The impact had a bizarre effect on his Commodore too, the car's roof effectively peeling off as he rolled to a stop at Reid Park before dropping back into place.

"The track is very loose at the moment, we just made a change, went back out and it definitely didn’t help it.

"It didn’t feel like it went in that hard, just slowly lost the rear and then tapped it.

"It looks a lot worse than what I think it is, there’s no suspension damage, just panel work, really, and for some reason the roof took a lot of it.”

It was a lightning fast opening session, Triple Eight Holden driver Jamie Whincup leading the way with a 2m04.674s.

“The car feels pretty good out of the gate which is nice. I hate starting seconds off and having to chase,” said the seven-time series champion.

“It’s still a huge job to do, tuning the car as the weekend goes on, but so far, so good.”

The Kostecki Brothers Racing entry was the best of the wildcards down in 23rd, 2.9s off the pace.

The Walkinshaw Andretti United wildcard, piloted by IndyCar aces Alexander Rossi and James Hinchcliffe, ended the session 26th and last, with a 4.5s gap to the fastest time.

“It’s a bit of a baptism of fire for us here,” said Hinchcliffe.

“Alex and I were joking earlier it’s kind of like drinking out of a fire hose.

“We have very little car knowledge, zero track knowledge and obviously this is one of the most daunting, challenging race tracks in the world.

“But man it’s beautiful. All the hype, it’s everything everybody said it was and then some."