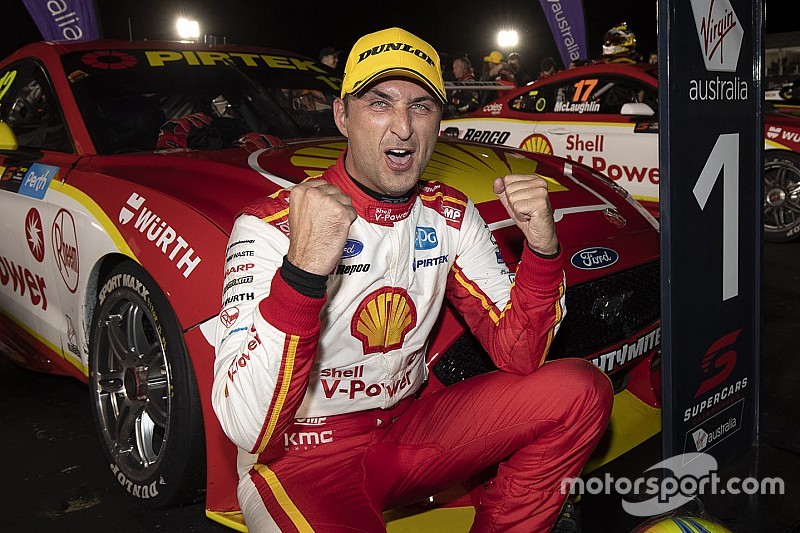 For the second race in a row Coulthard led a DJR Team Penske one-two, scoring consecutive wins for the first time since Symmons Plains/Phillip Island in the early part of the 2017 season.

Polesitter McLaughlin made a slow getaway from the dirty side of the grid, which not only allowed Coulthard to comfortably sweep into the lead, but also let Whincup – who started behind McLaughlin in third – to sneak into second.

It got worse for McLaughlin on the way out of Turn 1 as well, Chaz Mostert barging his way by on the run to the circuit's sole left-hander and relegating the Penske Ford to fourth.

On Lap 3 McLaughlin reclaimed third spot with a well-executed move on Mostert into the last corner, before quickly closing up on back of Whincup.

The Red Bull Holden proved a little tougher to pass, however, with Coulthard waltzing to a 2s lead as McLaughlin was stuck in third.

On Lap 15 McLaughlin made his stop in the search for clear air.

The undercut attempt was partially successful, Whincup coming out behind McLaughlin after serving his stop on Lap 18, while Coulthard went a lap longer and was able to retain the effective lead.

Whincup did have one crack at reclaiming second, using traffic to nose up the inside of McLaughlin at Turn 6 several laps after the stops. But McLaughlin did just enough to stave off the brief challenge.

After that the top two settled into a rhythm, Coulthard leading McLaughlin by between 1.5-2s.

It effectively stayed that way until the finish too, Coulthard's winning margin over his teammate 2.2s.

As the second stint wore on Whincup slowly slipped back to around 6s behind the leader, which meant he eventually fell into Mostert's clutches. With eight laps to go Mostert got by into third, a position he'd hold until the end.

Whincup soon found himself under attack again, this time from his teammate Shane van Gisbergen.

Having run a long first stint, only stopping on Lap 27, van Gisbergen had the better tyre life in the closing laps. Triple Eight asked Whincup to let the Kiwi go, but Whincup was in no mood to hand over the position, arguing that van Gisbergen wouldn't catch Mostert anyway.

The two Red Bull Holdens then staged a thrilling battle over the final three laps, Whincup just hanging on to fourth.

McLaughlin continues to lead the standings by 112 points over Coulthard.