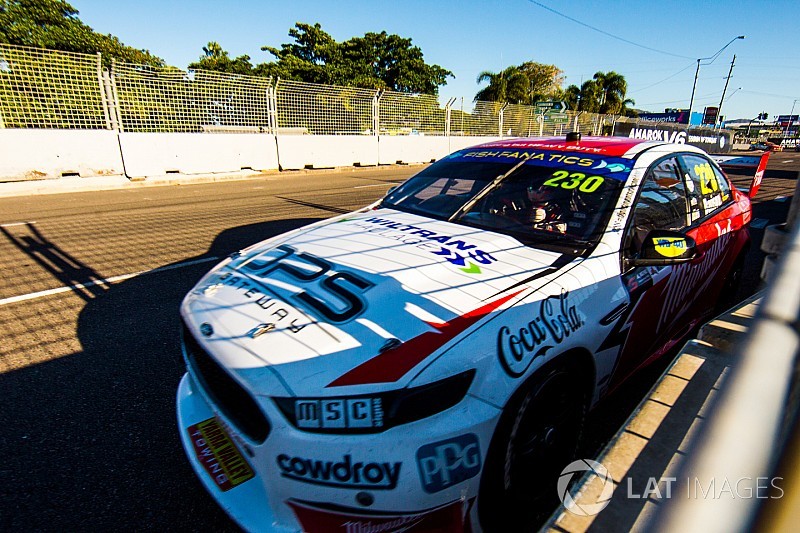 Will Davison says he was bemused by some 'pretty stupid' antics by rookie Supercars drivers in the closing stages of Sunday's Townsville race, which ultimately left him with damaged car and a DNF.

The 23Red Racing driver was scrapping away at the back end of the Top 10 during the final stint of yesterday's 200-kay race in Townsville when a Safety Car – sparked by Michael Caruso and Anton De Pasquale's spectacular clash – kick-started a chain of events that led to him being fired into the wall.

According to Davison it all started with a hip-and-shoulder from rookie Jack Le Brocq, which dumped him back in the pack, before a second clash with James Golding left Davison buried in the Turn 6 tyre wall.

"We were just hanging on in P9 or 10, and the Safety Car wasn't ideal for us because our tyres weren't in good condition," explained Davison.

"On the restart Le Brocq tried to pass me at Turn 3 and nearly spun me out, he hit me pretty hard. It's pretty ridiculous to be honest. He was in a good spot, I didn't expect it.

"Anyway that was that. From then on I was like a ping-pong ball. I was literally just trying to bring it home. I had no interest in damaging the car for 15th.

"Golding was racing somebody and he got into the back of me at Turn 2, Turn 3, then he was next to me at Turn 5. I knew he was on the outside, but I didn't think he's be able to hang there in the marbles. I left him a bit of room but I don't know what he was thinking.

"From there I was just trying to get to the end, and the next thing I'm going head on into the fence at 100 km/h. It was actually quite a big hit, it went off pretty fast. There's not much run-off there.

"You work your guts off for 66 laps and then the Safety Car causes all of that. Pretty stupid drivers, pretty poor form from them.

"I'm just shattered, shattered to finish the weekend with a crashed car. It's just unnecessary damage, which these young blokes seem to do for a hobby."

Le Brocq, who was slapped with a post-race 15s penalty for the bump on Davison, admitted he was at fault for that particular incident, but wasn't keen on sharing the blame for the Golding run-in.

"We came together at Turn 3, so it's a totally seperate incident to him and Golding," said the Tekno driver. "It's one of those things, Safety Cars seem to do these sorts of things.

"It's my fault, I got in the side of Will. I tried to get out of it at the last minute, but it was all too late. I got him out of place and knocked him back a bit.

"I'll shoot him a message to apologise. It's one of those things. It's a shame to end like that."

De Pasquale was also penalised following yesterday's race, the Erebus driver stripped of 35 points for 'reckless driving' in his run-in with Caruso.

Lowndes adamant his retirement not premature