IRWIN Racing sits fifth in the Pirtek Enduro Cup after a long day at the Supercheap Auto Bathurst 1000 where Lee Holdsworth and Craig Baird finished 14th. 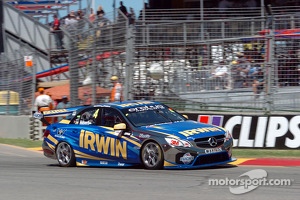 Good driving and slick pit stops on the Mercedes-Benz AMG E63 from Erebus Motorsport kept the IRWIN racer inside the top-10 throughout the first half of the race. However, the long green flag period over nearly the entire second half of the race brought fuel strategy into the mix and the higher consumption rate of the E63 forced longer stops on the pit lane.

The outright pace of the car was never in question, just traffic jumping the IRWIN AMG through the pit stop process. The record pace of the race showed the depth of driving talent in the field as well as the quality of the car preparation. This included the IRWIN car which never missed a beat underlying just how far the Erebus program has come with the E63 V8 Supercar.

The car finished the race without a scratch and will now head back to the team's HQ in Queensland in preparation for the Armor All Gold Coast 600 which is just two weeks away. The twin 300km event is the final round of the Pirtek Enduro Cup and once again will feature both Holdsworth and Baird at the wheel.

Holdsworth was surprised by exit rumours