An updated version of the entry list for the 6 Hours of Silverstone has been released with the teams confirming their driver line ups for the first round of 2014.

Following on from The Prologue, the FIA WEC Official Test at Paul Ricard, last weekend, an updated version of the entry list for the 6 Hours of Silverstone has been released with the teams confirming their driver line ups for the first round of 2014.

In LMP1-H there are no changes from the previously announced driver line ups in the manufacturer teams. Rebellion Racing have confirmed the drivers for the two Lola B12/60 Toyotas which will race instead of the new Rebellion R-One at Silverstone, with Matthias Beche racing in the no12 car with Nicolas Prost and Nick Heidfeld and Dominik Kraihamer, Andrea Belicchi and Fabio Leimer being confirmed in the no13 Lola-Toyota.

The LMP2 grid is unchanged from the previously announced entry list with seven cars entered for the opening 6-hour race of the year. 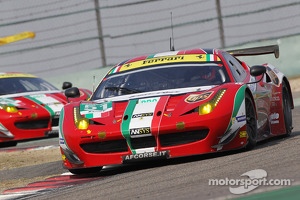 The drivers for the manufacturer entries in LMGTE Pro have been firmed up. Toni Vilander will join long time racing partner and current LMGTE World Champion Gianmaria Bruni in the no51 Ferrari 458, while Britain’s James Calado with join Davide Rigon in the no71 AF Corse Ferrari.

The two Porsche 911s will see Jorg Bermeister and Britain’s Nick Tandy join Patrick Pilet in the no91 car, with Richard Lietz, Frederic Makowiecki and Marco Holzer forming the three driver line up in the no92 car.

The drivers in the no52 RAM Racing Ferrari and the two Aston Martin Racing Vantage V8s are unchanged.

In LMGTE Am the only changes from the previously announced entry list is Sam Bird will race with Michele Rugolo and Stephen Wyatt in the no81 AF Corse Ferrari, while Pedro Lamy and Christoffer Nygaard will join Paul Dalla Lana in the no98 Aston Martin Racing Vantage.

The 6 Hours of Silverstone takes place on Easter weekend from the 18-20 April. The weekend also includes the opening round of the European Le Mans Series on Saturday 19 April and three races for the FIA F3 European Championship.

Cadillac has revealed the driver line-up for its attack on the FIA World Endurance Championship in 2023 with its new LMDh prototype.