Hyundai Motorsport drivers in fierce fight for fourth in Finland 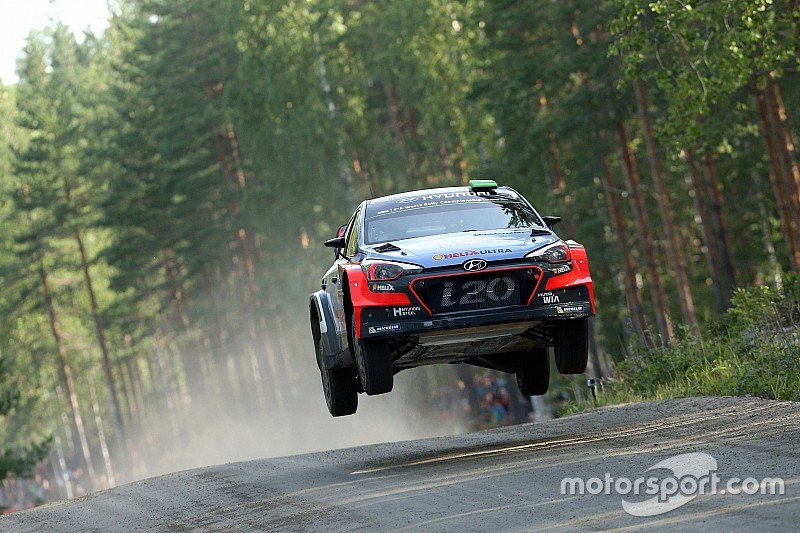 Hyundai Motorsport is involved in a close battle for top-five positions at the end of another challenging day on the fast stages of Rally Finland, round eight of the 2016 FIA World Rally Championship (WRC).

Hyundai Shell World Rally Team drivers Thierry Neuville and Hayden Paddon were split by just 2.7s at the conclusion of Saturday’s stages, with only 12 seconds separating fourth to seventh positions.

Saturday’s itinerary has seen drivers complete a total distance of 150km run over two loops of four stages. The rollercoaster jumps of the classic Ouninpohja, run in reverse for this year’s rally, have offered drivers one of the sternest and most exhilarating tests of the year today, alongside the Päijälä, Pihlajakoski and Saalahti stages.

Unfortunately, Hyundai Motorsport has struggled to find the optimum set-up for its New Generation i20 WRC cars so far this weekend. All three crews have been unable to settle into a consistent rhythm. A podium finish is not yet out of the question, however, with just four stages remaining and a under 20-second deficit to third placed Craig Breen.

Neuville (#3 New Generation i20 WRC) couldn’t retain the provisional podium he held at the end of Friday’s stages. Alongside co-driver Nicolas Gilsoul, the Belgian ended the penultimate day in fifth place and will now look to secure important manufacturer points on the final day of the rally.

Neuville said: “All in all it’s been a decent day. We have done the maximum we could do, and we’re involved in a nice, close fight with Hayden. I didn’t really feel comfortable at the start of the morning loop but we have tried to make improvements to the car throughout the day. We were hoping to gain more confidence in the afternoon but it wasn’t easy. Still, we are in a very close battle and the gaps are so small that it won’t take much for us to suddenly be back in podium contention. We just have to keep focused on our job and hope that we have a trouble-free Sunday morning.”

Paddon (#4 New Generation i20 WRC) was perplexed with an apparent lack of pace today. Running second on the road order, he and co-driver John Kennard have tried to stay in touch with their team-mates Neuville and Gilsoul with only 2.7s splitting the two crews after 20 stages.

Paddon said: “We started the day feeling more confident. It was certainly a better morning loop than we had yesterday. We made some changes to the car balance, adjusting some suspension settings, and it was more to my liking. Of course, we were second on the road so we were sweeping on the morning stages, which didn’t help. We were preparing for a good fight in the afternoon but we weren’t able to find the speed we were expecting. It was difficult to pinpoint why we were losing the time because I couldn’t have driven any faster. We’ll sit down with the team, do some homework and try to sort things out. I can’t be too negative - we get to drive a WRC car on these amazing Finnish stages and that’s special.”

Abbring commented: “We have just continued to acclimatise to the New Generation i20 WRC again on today’s stages. We’ve had to find the best compromise between finding speed and staying cautious. When you see people in front of you go off, as happened this morning, you’re reminded to take things carefully. To be in Finland for the first time in a four wheel drive car, it’s not realistic to be on the pace immediately. It’s the first time I drive this car competitively too, so we’ve been making changes on each stage to get a better understanding. We had an issue on this afternoon’s loop when we lost the paddleshift. The car was also misfiring with the mechanical lever too, so we had to drive around that. Our aim is still the top-ten, and we have four stages to achieve that tomorrow.”

Final service to prepare the cars

Hyundai Motorsport will evaluate all three New Generation i20 WRCs this evening and use final service to prepare the cars for the four final stages on Sunday. The team is determined on finishing the rally on a high point despite the struggles encountered so far in Finland.

Team Principal Michel Nandan commented: “We can’t take away too many positives from today. We’ve struggled to match the stage times of those cars ahead of us and haven’t set the sort of pace that we’ve seen in the other events this season. It’s a bit frustrating that we have not been able to mount a strong challenge because I am sure we are capable of more. All drivers have reported difficulties with the set-up of the car, and we have to try and identify what we can do for tomorrow. The battle for third place is difficult and as it currently stands we are looking at getting two cars inside the top-five. That would still deliver a good number of points for the manufacturers’ standings. However, it is not in our nature to settle for the top-five so we’ll continue to push and see what we can achieve tomorrow.”

Sunday will see two stages run twice - Lempäa (6.83km) and Oittila (10.15km) - with the second pass through Oittila run as the Power Stage.