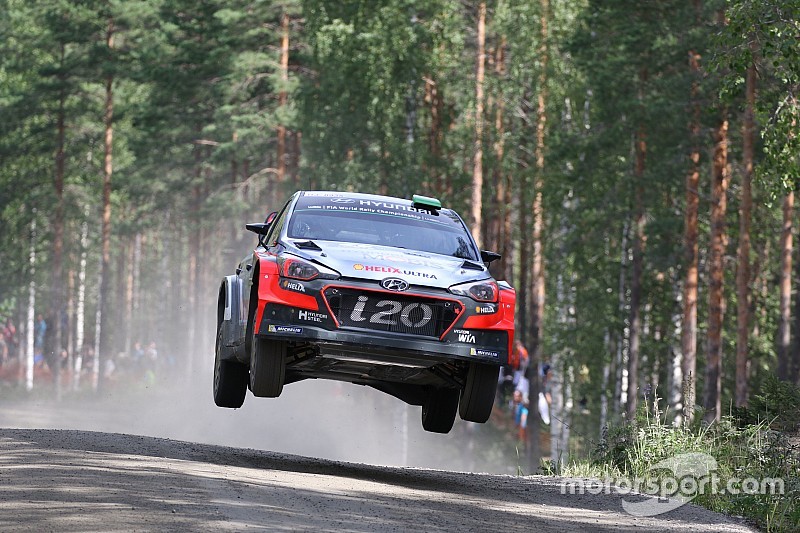 A tough but generally trouble-free day for Hyundai Motorsport at the start of Rally Finland sees two New Generation i20 WRCs comfortably inside the top-six.

Hyundai Motorsport has begun the second half of the 2016 FIA World Rally Championship with a generally trouble-free opening day at Rally Finland, round 8 of the 14-event WRC season.

The team has set its sights on a debut Rally Finland podium this weekend, and the initial signs look promising. Thierry Neuville holds third place on the overall classification at the end of a gruelling Friday itinerary.

Hayden Paddon is not far behind his Hyundai Shell World Rally Team colleague in sixth place at the conclusion of 12 of this weekend’s 24 stages. Kevin Abbring - stepping in for the recovering Dani Sordo for this event - is fighting for a top-ten position in the Hyundai Mobis World Rally Team entry.

None of the three New Generation i20 WRC crews had any significant troubles on the first complete day of action in Finland, although the team will use evening service to make setting adjustments ahead of tomorrow’s eight stages.

Neuville (#3 New Generation i20 WRC) and his co-driver Nicolas Gilsoul are on a competitive run of form following their sensational win in Sardinia and a fighting fourth in Poland. The Belgians took Hyundai Motorsport’s best Finnish result twelve months ago - fourth place - and will be hoping to consolidate their current third position as the rally continues.

Neuville said: “It’s been a day of two halves, really. In this morning’s first loop, we were pushing to the maximum but we weren’t really seeing the results on the timesheets. The car felt OK but we just struggled to find any traction. This afternoon we took the same approach. We got everything we could out of the car and the results were a bit better. It seems the morning loop doesn’t suit our settings so we will have to be aggressive first thing tomorrow. Still, I am pleased we are holding third position at the end of this first day. We know how unforgiving the rally is, and there’s a long way to go, but we’re there or thereabouts. We’ll try to make some improvements to the car ahead of tomorrow’s stages.”

Paddon (#4 New Generation i20 WRC) and fellow Kiwi John Kennard are holding a solid top-six position at the end of day one. The crew will be aiming for improvements tomorrow as they look to follow up their Polish podium with another strong points scoring result.

Paddon said: “It’s been a disappointing day but if you take the top two drivers out of the equation, we are not too far off. The morning was difficult. We tried to be aggressive but we struggled with the car on the loose and slippery conditions. We were sliding around and couldn’t stay in the lines. We tried to enjoy it a bit more in the afternoon but it’s hard when the times are not as we’d like them to be. Still, we will come back fighting tomorrow and aim to make up some positions.”

Abbring (#20 New Generation i20 WRC) and co-driver Seb Marshall are taking part in their third WRC event this weekend after a late call-up to replace the injured Dani Sordo. It was a pleasing day for the Anglo-Dutch crew in their debut rally driving the New Generation i20 WRC, despite an impact in the afternoon loop slowing their progress slightly.

Abbring commented: “I’d summarise by saying it was a pretty satisfying day. There are little bits that we can improve in all areas but this is normal in our first ever event with the New Generation i20 WRC. We didn’t do Poland so it’s been tough to get up to these incredibly high speeds and to find the confidence to drive flat-out. We’ve made improvements to the car as we’ve learned more about it, and adapting it to our style. The only real issue we had today was in SS8 (Mökkiperä) when I hit the front after a heavy compression. It seemed fine to begin with but by the penultimate stage of the day, we had some front right suspension damage so had to nurse the car back. Tomorrow’s another day - and I’m looking forward to it!”

The New Generation i20 WRC cars have shown their potential

Hyundai Motorsport has targeted the podium this weekend, to add to the top-three results it secured in Monte-Carlo, Sweden and Poland, and the two victories in Argentina and Sardinia. Although there is room for improvement, the New Generation i20 WRC cars have shown their potential on the exhilarating, high-speed Finnish stages.

Team Principal Michel Nandan commented: “If we look at the overall classification as it stands, I think we can be reasonably satisfied with this opening day of Rally Finland. Of course, things have not been 100% perfect but we know that Finland is a tough test of man and machine. All three crews have reported that there are improvements we need to make to the New Generation i20 WRCs to help them find a better feeling from inside the car - and to give them the confidence they need on these fast stages. We made changes during the day and apart from Kevin’s suspension damage this afternoon we haven’t encountered any real dramas. We are in the hunt for the podium but it’s a close fight so we need to work hard overnight to make sure the crews are well prepared for tomorrow.”

Saturday’s itinerary will take in a repeated loop of four stages, including the famous Ouninpohja test, run over a total stage distance of 150km. Starting with the classic 33km stage, drivers will then navigate the 23.50km Päijälä course before heading onto the shorter 14.51km Pihlajakoski and 4.23km Saalahti stages.