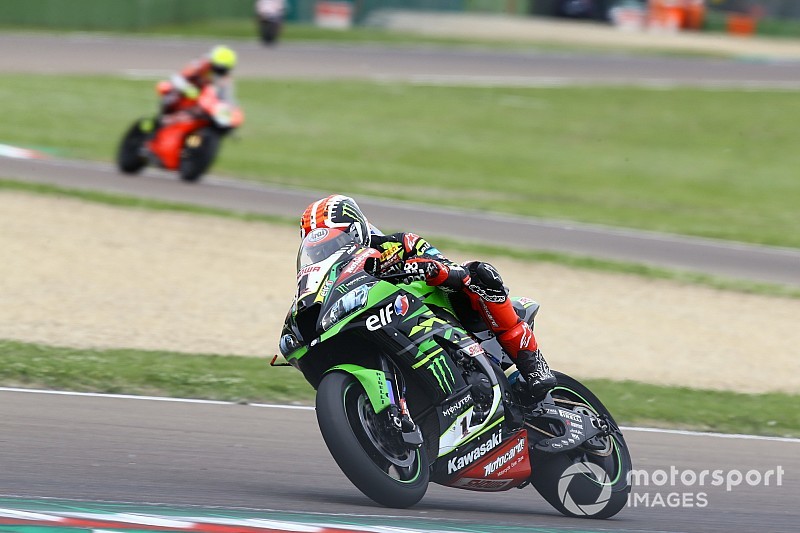 Rea, who had snapped Alvaro Bautista's 11-race winning streak on Saturday, challenged poleman Davies for the lead immediately after the start of the second race of the weekend.

He hounded Davies through the first few corners and lunged down the inside of the Ducati into the Tosa left-hander, only to run wide, handing Davies the lead and some breathing room.

Yet the Welshman then overshot his braking into the final chicane, badly compromising his run through the corner and dropping behind both Rea and teammate Bautista.

The trio ran in formation for the opening half of the short race, but Rea began to make his escape from Bautista around the four-lap mark.

A couple of laps later, Davies capitalised on Bautista running wide into Rivazza to overtake the championship leader for second.

But Rea was already a second-and-a-half clear by that point, and ultimately arrived at the chequered flag two seconds clear of the Ducati man.

Puccetti Kawasaki rider Razgatlioglu then dramatically slowed in the second half, slipping back to seventh place behind the other Yamaha of Alex Lowes and Rea's teammate Leon Haslam.

Tom Sykes started from the pitlane after missing the warm-up lap, but dragged his BMW back up to eighth place at the finish, narrowly beating Pedercini Kawasaki rider Jordi Torres.