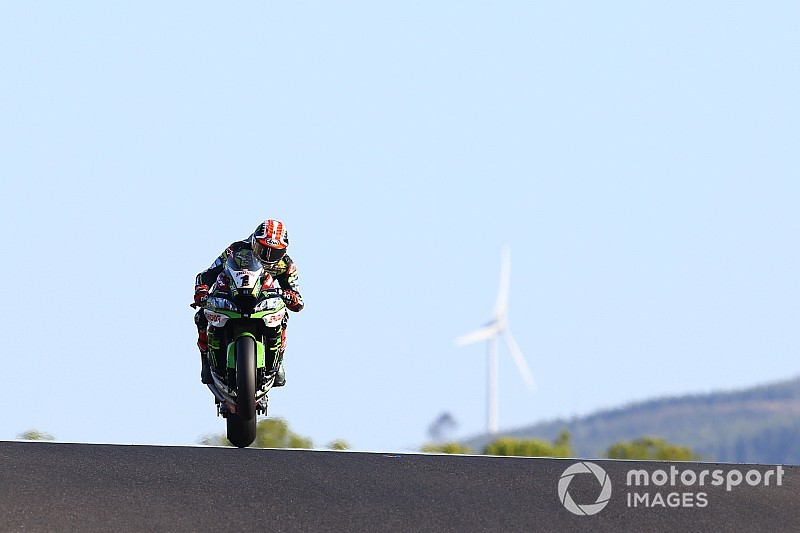 Jonathan Rea extended his World Superbike Championship points lead with a dominant race one victory at Portimao, while Alvaro Bautista was forced into a recovery ride after early contact with Chaz Davies.

Davies nailed his launch off the line from 12th on the grid and was charging through into the podium places into Turn 1 when he made contact with Ducati’s teammate Bautista.

Bautista was forced off track as a result and dropped to close to the back of the field, while Rea immediately opened up a lead of eight tenths over the chasing BMW of Tom Sykes.

The Kawasaki rider doubled that advantage next time around, with Davies closing in on Sykes for second having quickly disposed of the sister KRT bike of Leon Haslam.

Davies used the power of the Panigale V4 R to blast past Sykes at Turn 1 at the start of lap five, with Sykes dropping to fifth after making a mistake.

Rea continued to extend his lead to over four seconds by mid-distance, while Bautista had clawed back into the top 10 by the sixth tour.

Sykes’s earlier error promoted Yamaha’s Michael van der Mark to third, and he put a daring move on Davies around the outside of Turn 15 – though the Ducati would retaliate into Turn 1.

This duel continued for another couple of laps, before Davies broke away to a relatively comfortable runner-up spot to dominant race winner Rea.

Van der Mark came under no threat for third, though the battle for fourth raged to the finish between Haslam and the recovering Toprak Razgatlioglu and Bautista.

Razgatlioglu did hold fourth for a handful of laps, before Haslam mugged him at the first corner with seven tours remaining, while a mistake at Turn 5 for Alex Lowes (Yamaha) a lap later allowed Bautista through to sixth.

Bautista moved ahead of Razgatlioglu at Turn 1 with three laps to go and tried to do the same to Haslam at Turn 3 – though the KRT rider clung on up the hill.

However, he was powerless to stop him coming through at the first turn on the following lap, with Bautista using his better-preserved rear tyre to edge away to secure fourth.

Haslam held onto fifth ahead of Razgatlioglu, while Lowes brought the second Crescent Yamaha home in seventh ahead of the GRT duo of Sandro Cortese and Marco Melandri, as well as the Barni Ducati of Michael Ruben Rinaldi.

Go Eleven Ducati rider Eugene Laverty pulled out late on with a technical issue, having circulated for much of the race on the fringes of the top 15.

Rea’s 10th win of the season leaves him with a 93-point lead in the standings heading into Sunday’s two races.

Bautista "lucky" not to crash after Davies lunge