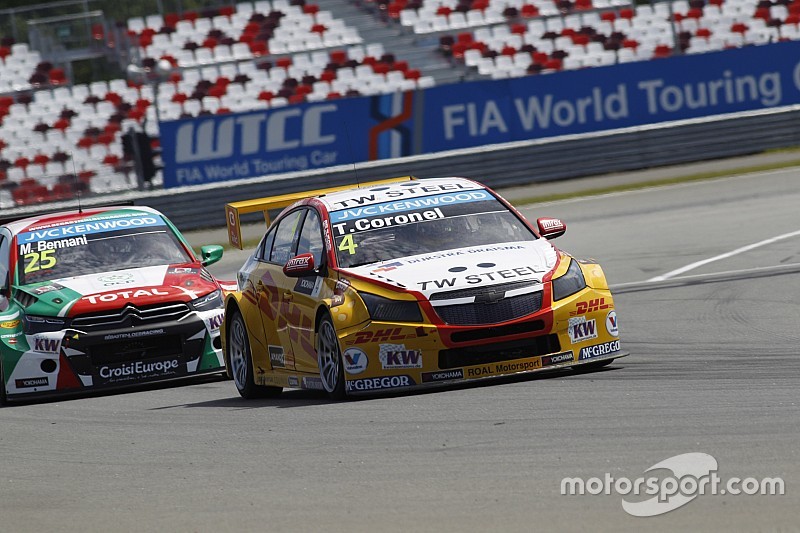 Tom Coronel changed the set-up of his Chevrolet Cruze several times, but didn't get the right feeling with his DHL yellow car.

Moscow – For Tom Coronel, repeating or even improving his fourth place from Moscow in 2014 turned out to be very difficult. Almost throughout the weekend at the almost four kilometers long Moscow Raceway, the Dutch driver had to cope with handling problems. Together with the ROAL Motorsport technicians, he changed the set-up of his Chevrolet Cruze several times, but didn't get the right feeling with his DHL yellow car. This explained the qualifying result that was rather disappointing to his standards with a pair of 14th places.

After a reasonable start, he tangled with the Lada of Dutchman Jaap van Lagen on the opening lap of the race. Coronel had a high-speed 360 degrees spin as a result and dropped back to 17th place, left without a chance. After a battle with Belgian Gregoire Demoustier for 16th place that lasted several laps, Coronel decided to head into the pits with one lap remaining. Together with the mechanics, he opted for a drastically different set-up of the car. In hindsight, that turned out to be the right decision, because in the second race, Tom Coronel was on the pace again, finished tenth and scored a valuable World Championship point.

For a driver, not being able to find out together with the team why the car isn't handling the way you want it to, is always frustrating. That certainly was the case for Tom Coronel and the ROAL Motorsport Chevrolet Cruze this weekend. "Everything that could go wrong, did go wrong. From the moment we arrived here, the car simply didn't run. We literally changed everything: springs, shock absorbers and roll-bars. You name it, really everything, but nothing worked. We were down in terms of lap times and the car was by no means consistent. We also had a broken turbo charger hose, a shock absorber broke and all these things added up into those two disappointing 14th places. Really bad for all of is, because we didn't really know where to find a solution."

"In the first race, my start was okay and I battled with Jaap van Lagen with his Lada on the opening lap. I overtook him on the inside of a right-hand corner and I looked whether I had already passed him. It seemed that way, but it wasn't fully the case. As a result, we tangled, I spun and I was all the way down in 17th place. I couldn't even keep up with Belgian driver Demoustier. One lap before the end, I drove into the pits to have the set-up on the front axle changed once again by the mechanics. Things we hadn't touched up to that point. In the second race, that turned out to be the right move, because the feeling was there again, I had more speed and I was able to compete.

But coming from 14th place on the grid, it is always difficult to compete for a top position. After everything that happened this weekend, that tenth place felt like the maximum I could achieve. It is clear that this result is giving us some confidence again for the races to come. After the race, Jaap van Lagen and I had to report to the stewards of the meeting for the incident in the first race. There were no real penalties, Jaap got an official warning, because he could have avoided the accident. That was it," Tom Coronel reported afterwards.