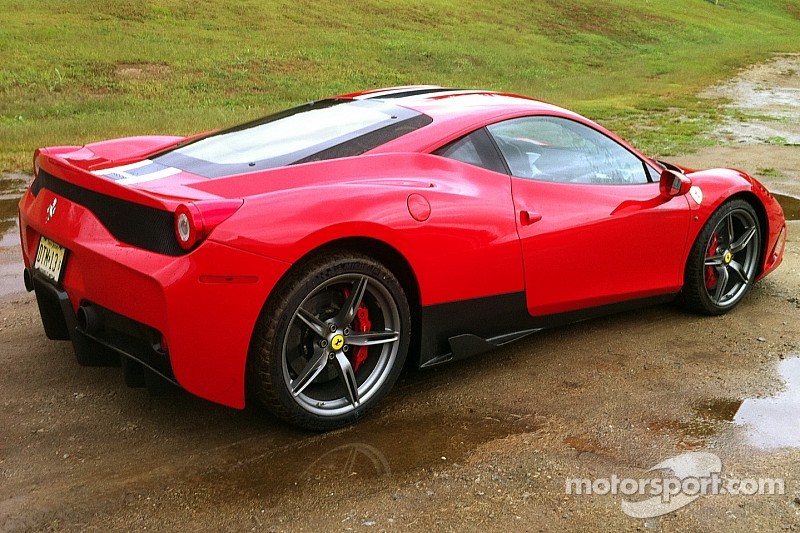 As Ferrari of North America celebrates its 60th anniversary this year, we spent a couple of days celebrating it, too, from behind the wheel of a 2014 Ferrari 458 Italia Speciale, a hot-rodded version of the Italia that’s considerably more powerful, considerably more expensive. Ferrari may not be having much of a year in Formula One, but in the showroom, things have seldom been better.

The Speciale is a remarkable car not so much because it cheerfully goes very fast – it does. What is more remarkable is how cheerfully it goes slow. The 597-horsepower Speciale is stunningly well-matched to the dual-clutch seven-speed automatic. (Want a manual? Sorry. Can’t have one.) Around town, this Ferrari is as well-suited to rush-hour traffic as any Toyota Camry.

And that is probably the biggest change in Ferraris over the past 20 years.

The first Ferraris equipped with this type of "electrohydraulic," paddle-shifted transmission were grim, and my original test car had a habit of popping into neutral at a stop light, and nothing – nothing – would make it go into gear, forward or reverse. Turn engine off, turn engine on, squeeze every lever you could find – eventually it would deign to find a gear, but not before 20 cars behind you roared around to the side, drivers and passengers giving us the single-finger salute. Similar early Lamborghini automatics were just as unsatisfactory – gear changes could be so abrupt that the car would decelerate between shifts so severely that your back would actually come off the seat for a second.

A few years earlier, a cross-country trip in a Ferrari 456 became a challenge to try and outsmart the electronics. How to make the flip-up headlights stop flipping up and down, and not even in unison? Pull the fuse for the motors in the floor panel, but you had to do it at just the right time or the car appeared to be winking at oncoming traffic.

Those days are over. Should you choose, you can now drive your Ferrari daily. Instruments and controls are logically placed; even the Manettino is easy to figure out – mostly, just leave it in “Sport” and forget it. Seats are excellent. Yes, luggage space is minimal, but let your butler, following at a distance in the family Range Rover, handle your Tumi suitcases and Honma golf clubs.

That said, there’s no arguing that Ferrari is building sports cars for the street that are not that far removed from Ferraris on the track. We asked Alessandro Balzan, driver of the 2013 Grand-Am championship-winning Ferrari 458 Italia for Scuderia Corsa, about the difference in our test car, and the one he raced at Petit Le Mans.

Two main differences, he says: Thanks to IMSA’s “Balance of Performance,” our street car had about 100 more horsepower than his race car. And with a redline of 9,000 rpm, we had 1,000 more revs than he does in his 458.

And that 9,000 rpm: Use the paddle shifters if you want, but even left in the automatic mode, the transmission – which is so gentle at modest speeds – runs right up to redline, the V-8 shrieking like mating bobcats. (Which, living in Florida, we’ve heard. We prefer the Speciale.) Now Ferrari has introduced a Speciale E, a convertible, which should make that engine sound all the more intoxicating, like dozens of bobcats.

Zero to 60 in three seconds

As if you didn’t realize you were accelerating quickly – 0-to-60 mph in about three seconds – a bank of helpful horizontal red LEDs illuminate, in sequence, across the top of the dashboard. Unless you are on a race track or private road, the last LED should probably mean “reach for your driver’s license,” as the noise attracts police faster than a Dunkin’ Doughnuts half-price sale.

Handling is on-rails on dry pavement, not as scary as you’d think in the rain. The huge brakes, quite linear, never give up. The made-for-the-car Michelin Pilot Sport tires are sticky but quiet. Required steering input is minimal, but the car never feels nervous.

Base price of our test car was $288,000, and $336,210 as driven, the difference made up of mostly options like carbon fiber engine covers, but man, that engine, on display underneath the rear window, is a work of art no matter what you do to it. You may even be tempted to adjust the center rear-view mirror to just show you the engine. Unwise, but who cares what’s behind you?

Ferrari has long built pretty, fast cars. Still does. But now you can drive those cars every day of the week. We’ve already said “remarkable,” but we’ll say it again.

Fiat spins off Ferrari, now you could own a piece of it