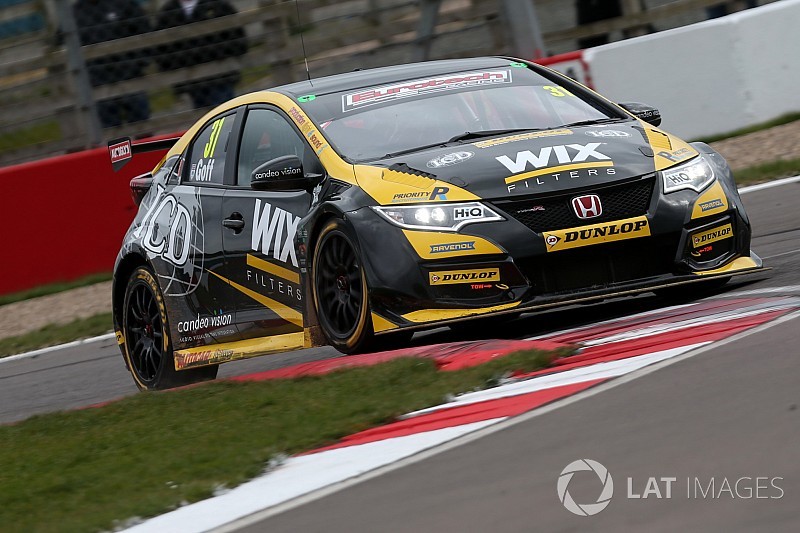 Jack Goff scored his third pole position in as many BTCC race meetings when he topped qualifying for the Brands Hatch opener in his Eurotech Racing Honda.

The 27-year-old gained the top slot halfway through the 30-minute session when Dan Cammish’s Team Dynamics Honda was stripped of the quickest time as he had failed to stop for a red light at the weighbridge.

Goff, who took pole in the last two rounds last year at Silverstone and Brands Hatch, clocked a 48.038s tour but that put him second to Cammish’s 47.946s lap until the Honda man had all of his times wiped after his indiscretion midway through the session.

Cammish returned to the circuit and claimed fourth place, but said he was distraught after his error.

“I am heartbroken. I am through the floor,” he said. “Those were some of the best laps I have ever driven in a new car and with front-wheel drive – and I feel like I have been robbed.

“I glanced at the red light as I came down the pit road and there were radio messages in my ear and it was confusing. I panicked. I didn’t know whether to stop in the pit road or carry on and I went back to the garage.

“I wonder if that was just TOCA [BTCC organisers] just trying to catch the new boy out. Despite all that, fourth isn’t too bad and if I wasn’t motivated before now, I certainly am now.”

Sharing the front row with Goff will be Motorbase Ford driver Sam Tordoff, who is returning to the BTCC after a year away racing GT cars.

Colin Turkington was third in his West Surrey Racing BMW after setting the pace early on, while teammate Andrew Jordan was fifth behind Cammish. Matt Neal rounded out the top six in his Team Dynamics Honda.

Reigning champion Ashley Sutton, who is racing his Team BMR Subaru with the older specification Mountune engine, was 18th, while Jason Plato, who has the team’s newer Swindon Racing Engines-tuned powerplant, was 29th.

Why this BMW driver will win the BTCC