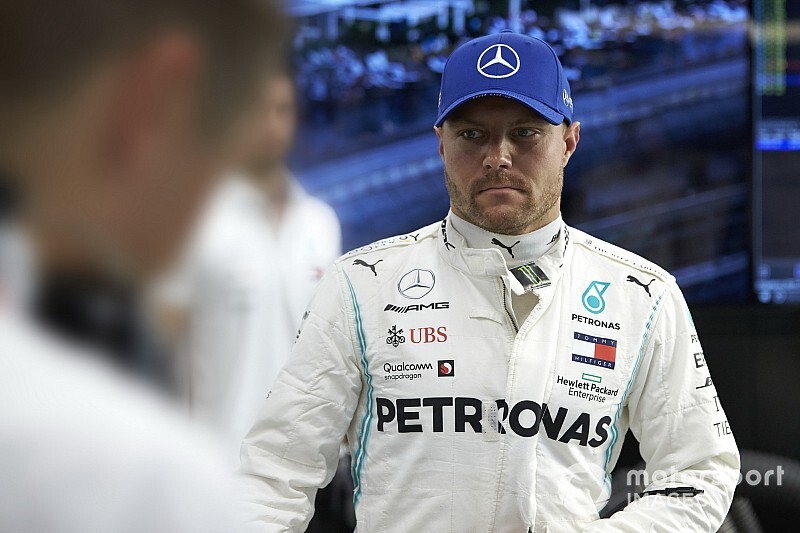 Valtteri Bottas had blamed an unplanned passing move by Mercedes Formula 1 teammate Lewis Hamilton for spoiling his lap in qualifying for the Singapore Grand Prix.

Mercedes had a particular issue with tyre warm-up, with the drivers requiring a faster out lap than most of their rivals in order to get tyres up to temperature.

In the build-up to his final run in Q3, Bottas was trying to make a gap for himself while keeping up sufficient speed to maintain tyre temperature when he was unexpectedly passed by Hamilton.

That forced him to slow to create a gap once again, and his less than optimum pace in turn compromised tyre temperatures. Struggling for grip he could manage only fifth place, having been fastest in Q1.

The Finn says the subject of the unplanned passing move was discussed within the team in the debrief in an attempt to ensure there is no repeat.

"The first run there was lots of cars," said Bottas. "All weekend we've been needing to have proper out laps to get the tyres switched on, but I only got that in Q1. The first run in Q2 was also pretty OK, but after that always traffic affected.

"Then the last run was quite messy. The last run in Q3, no it was not planned [to swap positions]. I was slowing down because of the Red Bull ahead trying to get a bit of a gap, and I think Lewis didn't know that there was a car ahead of me, he thought I'm just slowing down for fun.

"Obviously it was incorrect and he got ahead, so that I had to slow down again. We've discussed that internally and tried to make sure of ways that it won't happen again, basically. It was not the plan for sure."

Bottas stressed that in Singapore Mercedes required a faster out lap than its rivals in order to get the most out of the tyres.

"I think we had the quickest out laps from all the teams, we needed that to get the tyres ready, especially the front tyres. Ideally we would have had completely free air and much quicker than we what were able to do.

"Actually you build up the tyre temperature only on the surface, with the wheelspin and everything, and the grip is just not there.

"The difficult part is to get a good stagger front to rear. Obviously now this year the blanket temperatures that Pirelli is allowing are lower than last year. Even last year it was not easy to get the fronts to work, but we could.

"But now with the lower blankets I think for us for some reason it is a bit more difficult, and it's one of the most difficult tracks for that.

"Track temperature is actually quite low, there's not many high-speed corners on the out lap to bring the temperature and the energy into the tyre. And it is that front to rear balance, I think that's the issue for us here."

Bottas admitted that from fifth it won't be easy to move up the order in the race.

"On paper if you look at this race for sure if there's not many things happening it could be a tough day, a long day, but you never know. We've seen exciting starts here, lots of safety cars and things.

"Obviously I think with the top three teams there's no huge difference in terms of race pace and if there are some differences it's not going to be enough for overtakes. Strategy, maximising opportunities if there's something happening, then that's my best bet.

"I need to close within a good gap to the cars ahead and see what's going to happen and keep the tyres in good nick and use them when needed."